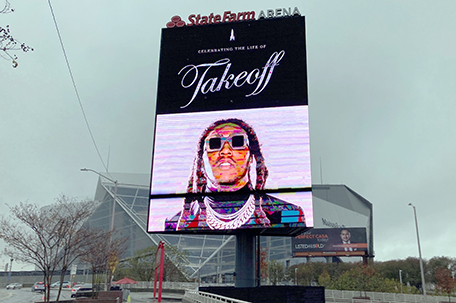 ABOVE PHOTO: A sign announces the memorial service for slain rapper Takeoff at Atlanta’s State Farm Arena on Friday, Nov. 11, 2022. He was a member of the hip-hop trio Migos. (AP Photo/Sudhin Thanawala)

ATLANTA — Fans gathered Friday to remember slain rapper Takeoff, a member of the hip-hop trio Migos, in a rainy downtown Atlanta near where the 28-year-old grew up.

State Farm Arena, home of the Atlanta Hawks, was hosting a memorial service to celebrate the rapper’s life and music, and a massive sign outside the arena was lit up with the rapper’s image.

Takeoff, born Kirsnick Khari Ball, was shot, and killed earlier this month outside a Houston bowling alley. A woman and another man were also wounded in the shooting. No arrests have been made.

Jenifer Loving, 22, stood in line with her infant son, Mateo, for more than an hour before doors opened to fans. She said Takeoff’s death was heartbreaking because he was so young.

Migos’ music represented the creativity and culture of the Black community, she said, and she worried the group would be too saddened to make new music — at least for a while.

“It’s just something that you can play anywhere, and everybody will just come out and come around and dance,” she said. “It’s how it brings people together. It’s how it makes the whole room just fill up with positivity.”

Eric Hood, an Atlanta firefighter, said he was shocked when he heard about Takeoff’s death because of the three members of Migos, he was considered the most laid back.

Migos’ music was an “escape” for many people, he said, and he was hopeful the event would leave his family and the rest of the group with lasting memories of him.

“I pray for them,” he said. “I hope they continue to be uplifting, positive, influential members in the society and keep pushing forward.”

Free tickets to the memorial service were available to Georgia residents, but State Farm Arena said well before Friday that the event had reached capacity and fans without tickets should not come downtown.

The venue did not release a program for the event.

Migos broke out nearly a decade ago with the 2013 hit “Versace,” which hit even greater heights in popularity through a Drake remix.

Houston Police Chief Troy Finner said the day after the shooting that Takeoff was “well respected,” and there was “no reason to believe he was involved in anything criminal at the time.”

Migos’ record label, Quality Control, mourned Takeoff’s death in a statement posted on Instagram that attributed it to “senseless violence and a stray bullet.” Police have said nothing about the gunshot being stray.

Instead of flowers or gifts, his family has asked that people make donations to The Rocket Foundation, which was established in Takeoff’s honor and aims to prevent gun violence, according to its website.