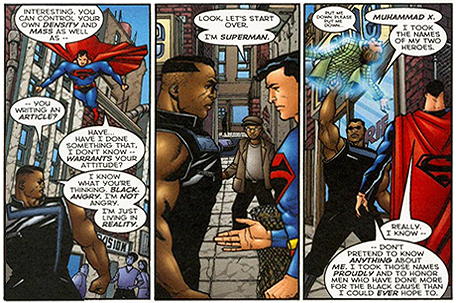 [In lieu of the upcoming Wizard World Comic Con coming to Philadelphia in June, the SUN ran across this fascinating article in Shadow and Act about DC Comics and their treatment of Black characters over the years and thought our readers would find iit an interesting read.]–Ed.

In light of the upcoming weekend’s release of the next Superman movie, “Batman v Superman: Dawn of Justice” which opened on Friday, March 25, and which sees Laurence Fishburne playing Perry White (a character that’s always been white in the comics and in the movies), I suddenly felt the urge to see what I could learn about race in the Superman universe – specifically, whether Superman has ever dealt directly with race/racism in the comics, at least.

First, I found the above comic book panel which I encourage you to read before moving on… 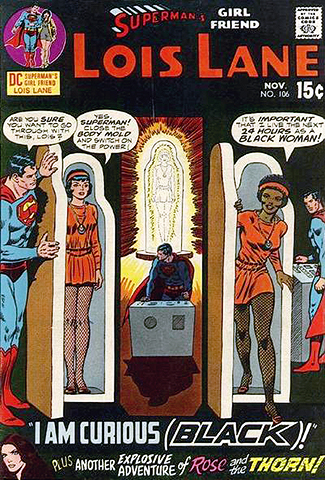 I’m no comic book enthusiast, so I can’t say how many times Superman serials have actually dealt with race. Maybe those of you who are comic book experts can educate the rest of us on this. I came across the sheet above via a Google search, and was humored by the content as I read it (out of context); I wasn’t sure if it was genuine, although, after some digging, found out the specific Superman issue (v2, #179), and year it was published (August 2002).

Naturally, I Googled “Superman v2, #179, August (2002),” and the first item returned was a link to Wikipedia (of course) for a character by the name of Muhammad X. Yes, he’s a black Superhero!

I followed the link, and found the following, on Muhammad X’s Wikipedia page: Muhammad X is a fictional character in the DC Comics universe. Real name unrevealed, his first (and so far sole) appearance was in Superman v2, #179 (August 2002). Muhammad X is the self-proclaimed protector of Harlem NY, using his ability to alter density and gravity to protect the community. When Superman runs into him, Muhammad browbeats him, accusing him of ignoring Harlem and, in essence, the black community. This causes the Man of Steel to question his understanding of race relations and leads to his seeking advice from his supporting cast/colleagues such as Lois Lane and Natasha Irons. Natasha names a few black superheroes Superman has never heard of, but are apparently well known in the black community, such as Rush & Silence, Stoneyard and Underground. Indeed the heroes named here have yet to appear in any DC Universe comic. The issue concludes with Superman confronting X a second time, telling X “…I can’t change the color of my skin… what I try to do is something far more difficult… to be a human being. And hopefully, someday, we’ll see each other only in that way.” Superman flies off, to which Muhammad replies to himself “Yeah, well… I guess that’s how you sleep at night.” 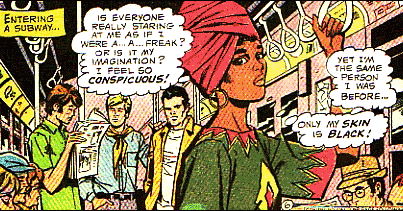 I did some further googling and came across what follows below on a site called MillionairePlayboy.com.

The writer shares a story of his trip to his local comic book store where he uncovered this issue of Superman, which featured a story centered around Lois Lane, titled “I Am Curious (Black),” in which Lane transforms into a black woman for 24 hours to get a story and, in the process, gets to see what it’s like being a black woman.

The writer’s story along with images from the comic follow:

“The story begins with Lois assigned to do a story on Metropolis’s urban area that Lois refers to Little Africa. It seems that all black people refuse to submit to an interview done by Miss Whitey. Young children, old blind ladies, and even people on the street hate white people. With Superman’s help Lois is placed inside the Plastimold and the Transformoflux Pack invented by Dahr-Nel, Kryptonian Surgeon. Apparently this machine is meant to change white people to black people. You have to wonder if Superman uses this machine often?

Disguised as a black woman, Lois proceeds to experience what it is like as an African American. Benny the friendly neighborhood taxi-driver refuses to pick up Lois the black woman. On the subway, the white men stare at her, making her feel completely uncomfortable. Lois eventually meets the radical anti-white black rebel who earlier called her “whitey.”

The radical Dave Stevens, taken in by this fine black woman, is distracted when he witnesses a drug deal going down. Telling Lois to “Stay here! This is a man’s business!” Dave really enforces the social inequality of the story. Refusing to let the gangsters sell their poison, Dave confronts them and is shot during the struggle. Superman, who always keeps his eye on Lois, saves the day flying Dave and Lois to the hospital.

At the hospital Dave needs a blood transfusion but, the hospital is out of O negative blood. Realizing that she can help, Lois states in a very shocking way “I—I’m O-negative!” Here we see the underlying theme of the book highlighted; underneath, we are all the same. After she donates the blood, her 24 hours are up and she reverts back to the white Lois Lane. When Dave awakes to see that Lois is not a beautiful black woman, but the cracker he snubbed, he is at first shocked, realizing then you can’t judge a book by its cover. Superman informs Lois “If he still hates you… with your blood in his veins… there may never be peace in this world!” Luckily for us they all get along in the end.”

I couldn’t help but laugh at all of that, including the panels themselves! Maybe consideration should be given to the time it was created – November, 1970. Although the Muhammad X story is much more recent; it was created about 14 years ago.

So, like I said, I’m no comic book pro, thus I’m not aware of many other instances in which Superman dealt directly with race in the comics. I certainly hope these aren’t the ONLY attempts. So help me out here folks, with Superman set to hit a theater near you this Friday, with Batman and Wonder Woman (and others) along for the ride. Maybe future Superman movies will introduce Muhammad X… maybe not.