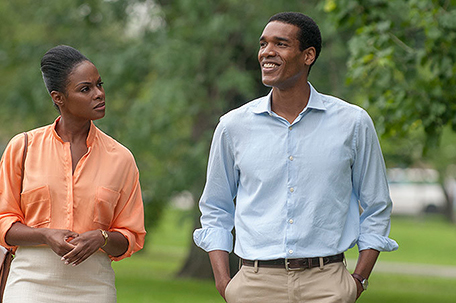 ABOVE PHOTO:  Tika Sumpter as Michelle Robinson and Parker Sawyers as Barack Obama in a scene from “Southside With You.”

Southside With You is a low-key romance with one heck of a hook, following a up-and-coming corporate lawyer named Michelle Robinson as she spends one summer day in Chicago in 1989 with one of her firm’s interns: Harvard student Barack Obama. The whole “two people walk around a city and fall in love” plot has been done — most notably by Richard Linklater with his Before Sunrise/Before Sunset/Before Midnight trilogy — but by making his young lovers into the future President and First Lady of the United States, writer-director Richard Tanne easily clears one of the biggest hurdles facing anyone trying to grab an audience. No one can reasonably ask, “Why should I care about these two schmoes?”

Still, don’t underestimate the degree of difficulty to what Tanne’s attempting here. Not only did he have to cast a credible Barack and Michelle, he also had to know that he was automatically going to alienate potential audience members who dislike the Obamas’ politics. Even staunch liberals could’ve found Southside With You embarrassing, if the acting was off or the dialogue too presumptuous about its subjects. That’s probably why Tanne keeps the scope of the film so small. With the exception of one big scene at a community-organizing meeting, Southside With You minimizes politics and instead just tags along as two ordinary people get to know each other.

Tika Sumpter does a fine job as Michelle, capturing the character’s wary calm as she navigates multiple worlds at once, from the working-class Chicago neighborhood where she still lives with her parents to the high-powered law office where she feels she has to work extra hard to be seen as “Michelle” and not “the black woman.” But the real discovery here is Parker Sawyers, who does an Obama impression that’s uncanny not just in its inflections, but in its meaning. He’s recognizably Barack, with the same “no drama” attitude and the same ability to converse with anyone about anything. It’s just that in Southside With You, instead of talking about infrastructure and drone-strikes, he’s giving his opinions about Stevie Wonder albums, Spike Lee movies, and the paintings of Ernie Barnes (the man who did J.J.’s artwork on the ‘70s sitcom “Good Times”).

Over the course of the afternoon — and on into the evening — Barack takes Michelle to an art museum, a park, a bar, and a movie, all the while trying to get her to let go of her insistence that it’d be inappropriate and unprofessional for them to go on an actual romantic date. He wins her over though, hour by hour — and most convincingly when he brings her to the community meeting, which is the reason they’re hanging out together on a Saturday in the first place. Michelle meets the people who knew and loved the future POTUS in his pre-Harvard days, and she hears him give a speech about incremental change that’s a classic example of Obama rhetoric: pragmatic but positive, with empathy for what his his audience wants and respect for their opponents.

It’s that scene that most screams “this is a movie about the Obamas.” But what’s fascinating about the film’s premise is that it gives Tanne more character detail and topics of conversation to work with than most filmmakers have when they’re telling a love story. Michelle can talk about her basketball coach brother Craig and her girlhood in Chicago; Barack can talk about his absentee father and a youth spent in Hawaii and Indonesia. The depth and variety of the chit-chat should be enough to convince any screenwriter to skip “write what you know,” and instead to draw from Wikipedia.

Southside With You is ultimately pretty slight and predictable — and not just because there’s no reason to worry that these two crazy kids won’t end up together. The movie holds to a steady but too-straight rhythm, hitting all the expected romantic-drama beats, right down to the occasional argument that threatens to stop the date cold. But Southside With You is also winningly sweet and earnest, and refreshingly frank about the problems that minorities face when they try to get ahead in a culture dominated by white males. Tanne extrapolates from the Obamas’ story to make a somewhat more universal film about assimilation, Chicago life, and how it feels to meet a soulmate. Put it this way: There’d be no movie here if not for who the characters are; but even if Tanne had changed their names, Southside With You will still be a charmer. [B]