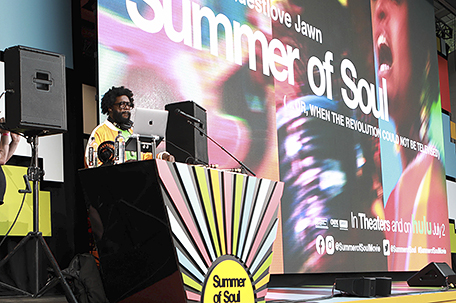 ABOVE PHOTO: Ahmir “Questlove” Thompson performs at a special screening of “Summer of Soul” at The Richard Rodgers Amphitheater at Marcus Garvey Park on Saturday, June 19, 2021, in New York. (Photo by Jason Mendez/Invision/AP)

This article first appeared in the SUN in July 2021.

Black music has such a rich history, legacy and global cultural impact. It’s had an even greater impact on the Black community as a whole. With a wide array of sounds and the blending of genres, Black artists have always used music as a platform for change.

When it comes to musical royalty, Philadelphia’s own Ahmir “Questlove” Thompson has been paving the way for musicians and music enthusiasts for decades as a member of The Roots, the musical director for “The Tonight Show Starring Jimmy Fallon” and a New York Times best-selling author.

Questlove can now add director to his list of accomplishments thanks to his directorial debut:  A Questlove Jawn, “Summer of Soul (Or, When the Revolution Could Not Be Televised).”

“Summer of Soul,” which premiered at Sundance, receiving the “Grand Jury” and “Audience” award is a documentary that highlights a hidden masterpiece — The Harlem Cultural Festival.

The Harlem Cultural Festival was a six-week festival that took place in Harlem at the same time as Woodstock in 1969. The footage captured performances by some of the biggest names in R&B, gospel, Afro-Latino and Latin music including  Stevie Wonder, Sly and The Family Stone, B.B. King, Mahalia Jackson, Nina Simone, Gladys Knight & the Pips, Ray Barretto, The Staple Singers and The Fifth Dimension.

However, this historic footage was lost — buried in a basement for 50 years. During a webinar press junket, Questlove shared the incredible journey behind the creation of this film.

The brainchild of Tony Lawrence, a lounge singer and emcee, The Harlem Cultural Festival hosted over 300,000 people for six Sundays straight in Harlem’s Mount Morris Park. Questlove was introduced to the festival footage long before taking on the role of director.

“I first inadvertently saw the footage in Tokyo in 1997,” he said. “My translator for that tour knew I was a soul fan and took me to a place called The Soul Train Cafe. I didn’t know I was watching The Harlem Cultural Festival; I just assumed that all festivals in the 60s were from Europe, because America really didn’t have that culture yet. Only to find out 20 years later, when David Dinerstein and Robert Fyvolent told me that they had this footage and they wanted me to direct this film.”

As a multi-hyphenate who is well versed in a number of areas in the entertainment industry, Questlove shared his initial trepidation in taking on this project.

“This project, more than anything, has helped me develop as a human being. Sometimes artists can be neurotic…living inside our heads,” he explained. “I won’t hesitate to admit that of all the things I’ve done creatively, this is the one that I was really nervous about, and by nervous, I mean scared partly because I’m a perfectionist. What I will say is that this film has really brought out an awareness and competence in me that I never knew I had.”

“As far as I’m concerned, there was a perfect balance of soul music, free jazz and salsa music. The gospel aspect of it — I kind of see gospel and free jazz as the same thing,” he said. “I wanted people to know that this isn’t just Black people acting wild and crazy, that this was a therapeutic thing. For a lot of us, gospel music was the channel — because we didn’t know about [the] dysfunctional families, therapy and life coaches that we have now.”

Questlove immersed himself completely into the process of selecting which performances to include in the documentary — the result is absolutely mind-blowing.

“There was a point where I was wondering could I take the same approach that I take to DJing or putting on a show together with this movie and that’s exactly what I did,” he said. “For starters, for five months, I just kept it on [a] 24-hour loop, no matter where I was in the house or in the world. If anything gave me goosebumps, then I took note of it. I felt like if there were 30 things that gave me goosebumps, we could have a foundation.”

After consuming the brilliance of this documentary and festival, audiences will be left with one question, how could a festival of this magnitude remain hidden for so long? The answer in short… Black erasure.

“This is the first time that I’m really seeing conversations that were never had before,” Questlove said. “We really weren’t speaking of Black erasure. Years before, we sort of coded it as cultural appropriation, which was a really politically correct way of saying that. It was always draped in slang, so that you couldn’t see the heart or the sincerity of what the problem was.”

“Be it Tik Tok content or be it a festival, I know this one thing… this isn’t the only story out there!” he added.  “This isn’t the only footage that’s laying around unscathed. So perhaps this film can be an entry –sort of a [sea]change for these stories to finally get out.”

“Even something as minuscule as content on social media or a giant one of the first-ever Black festivals is important to our history,” Questlove continued. “As for me, I didn’t come into this wanting to be a director or any of those things. I do believe that creativity is transferrable, so this is not my last rodeo telling our stories. if anything I’m more obsessed now than ever to make sure that history is correct, so that we don’t forget who this artist is or that event is.”

In the documentary, Marilyn McCoo of The Fifth Dimension recalled a time when she was told that the Fifth Dimension’s music wasn’t Black enough. “Summer of Soul” helped to dispel this ideology that Black music is a monolith. It is a love letter to Blackness and Black music,  celebrating it in all of its forms.

Rich with nostalgia and phenomenal performances, The Harlem Culture Festival was a safe place for Black people to come together and enjoy the things that they had in common… a love for music and each other. It was a cultural movement that allowed people to express themselves in their most authentic ways. At a time when the mere existence of Blackness was considered a threat, racism was standard and powerful leaders like the Rev. Dr. Martin Luther King and Malcolm X were being assassinated. Lawrence gave an entire community of Black people a refuge.

Questlove gifted all of us with a true gem in this documentary. “Summer of Soul” is in theaters and available to stream on Hulu — it’s a must-see!

Editor’s note: Since this article was first published, The Roots drummer and “Tonight Show with Jimmy Fallon” bandleader Ahmir “Questlove” Thompson won his first Oscar for best documentary feature: “Summer of Soul (… Or, When the Revolution Could Not Be Televised).”