Summer movie calendar: From ‘Top Gun 2’ to ‘Thor 4’ part one 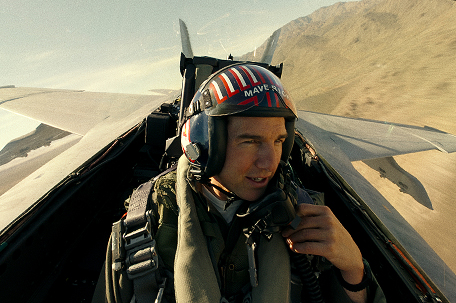 A rundown of notable films coming out this summer:

“Doctor Strange in the Multiverse of Madness” (Disney, theaters): After breaking open the multiverse in “Spider-Man: No Way Home,” Benedict Cumberbatch once again takes center stage as the brilliant Doctor Strange as he and Wong deal with new enemies in the Sam Raimi-directed spectacle.

“Happening” (IFC, theaters): This Venice Film Festival winner directed by Audrey Diwan is based on Annie Ernaux’s memoir about being a young college student in 1960s France seeking to terminate a pregnancy when it was still illegal.

“Along for the Ride ”(Netflix): A teenage girl meets a mysterious insomniac the summer before college.

“This Much I Know to be True” (theaters): Andrew Dominik’s documentary about the creative partnership between musician Nick Cave and Warren Ellis.

“On the Count of Three” (United Artists Releasing, theaters): Jerrod Carmichael directs and stars with Christopher Abbott in this comedy-thriller about two depressed friends who plan to end their lives by the end of the day.

“Senior Year” (Netflix): Rebel Wilson plays a once popular teenager who wakes up from a 20-year coma and has to finish high school as a 37-year-old.

“The Innocents” (IFC, horror): The children have special powers in this supernatural Nordic horror.

“Downton Abbey: A New Era” (Focus, theaters): The Crawley family is back and traveling to the south of France to investigate a villa that the Dowager Countess has inherited. New additions to the well-heeled lot include Hugh Dancy, Laura Haddock, Nathalie Baye and Dominic West.

“Men” (A24, theaters): “Ex Machina” and “Annihilation” filmmaker Alex Garland directs Jessie Buckley in this new thriller about a woman who goes to the country after a personal tragedy. Instead of peace, she finds a waking nightmare.

“Hold Your Fire” (IFC, theaters): Explore the birth of modern hostage negotiation in Stefan Forbes’ documentary about an incident in 1973 Brooklyn.

“Emergency,” (Amazon): This Sundance satire looks at three Black college students grappling with whether or not to call the police.

“A Perfect Pairing” (Netflix, May 19): Victoria Justice is a city girl who goes to the outback in this rom-com.

“Top Gun: Maverick” (Paramount, theaters): Tom Cruise returns to one of his most beloved roles in this “Top Gun” sequel that’s over 30 years in the making. After years of working solo as a test pilot, Maverick is called back to train a new batch of fighter pilots, including Goose’s son (Miles Teller).

“The Bob’s Burgers Movie” (20th Century Studios, theaters): Bob, Louise, Tina, Gene and Linda Belcher finally get their big screen due, with the original voice cast of the popular series all intact. And it’s a musical!

“A Chiara” (Neon, theaters): A 15-year-old searches for the truth of why her father abandoned her family in Calabria in this Italian-language film from Jonas Carpignano.

“Crimes of the Future” (Neon, theaters): David Cronenberg is back with another body horror starring Léa Seydoux, Viggo Mortensen and Kristen Stewart.

“Watcher” (IFC, theaters): A young woman (Maika Monroe) who has just moved to Bucharest becomes increasingly paranoid that she’s being stalked in this slow burn thriller.

“The Phantom of the Open” (Sony Pictures Classics, theaters): The true story of the “world’s worst golfer” Maurice Flitcroft (Mark Rylance) who still manages to get a shot in The British Open.

“Hustle” (Netflix, on June 8): Adam Sandler is a past his prime basketball scout who needs a win and finds it abroad.

“Halftime” (Netflix): A documentary about Jennifer Lopez set around her Super Bowl performance.

“Lightyear” (Disney, theaters): Long before landing in Andy’s room, Buzz Lightyear was a young astronaut trying to get home from a hostile planet in this film-within-a-film origin story. And this time, Buzz is voiced by Captain America himself, Chris Evans.

“Cha Cha Real Smooth” (Apple TV+ and theaters): Dakota Johnson is a single mom who strikes up an unusual friendship with a fresh college graduate (plays by writer-director Cooper Raiff) on the Bar Mitzvah circuit.

“Spiderhead” (Netflix): Chris Hemsworth plays a scientist who experiments on inmates (Miles Teller and Jurnee Smolett) with psychedelic drugs in this adaptation of a George Saunders short story.

“Brian and Charles” (Focus, theaters): A lonely inventor makes an AI robot in this charming Sundance comedy about friendship.

“Father of the Bride” (HBO Max, on June 16): This remake of the remake has a Cuban-American spin and stars Andy Garcia and Isabela Merced.

“Elvis” (Warner Bros., theaters): Baz Luhrmann takes a look at Elvis Presley (Austin Butler) and his complex relationship with his manager, Colonel Tom Parker (Tom Hanks) over the course of 20 years in this music-filled journey.

“The Black Phone” (Universal, theaters): Director Scott Derrickson is back to scare audiences silly with this film about an abducted boy who hears the voices of his kidnapper’s victims through a disconnected phone on the wall. Ethan Hawke stars opposite newcomer Mason Thames.

“Marcel the Shell With Shoes On” (A24, theaters): Dean Fleischer-Camp and Jenny Slate’s one-inch-tall seashell with the equally tiny voice gets his own movie (in which he searches for his family).

2010 Summer Movie Preview- ‘tis the season of sequels and remakes