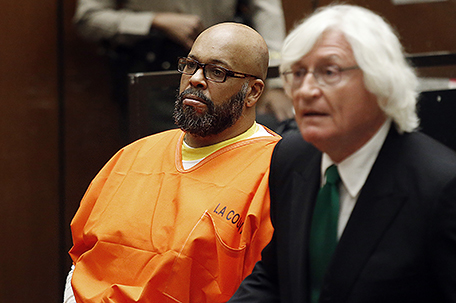 ABOVE PHOTO:  Marion Hugh “Suge” Knight, left, sits with his attorney Thomas Mesereau, in Los Angeles Superior Court, during a hearing in a murder case filed against the Death Row Records co-founder. Mesereau states in a court filing released Wednesday, July 8, 2015, that new video of a January 2015 confrontation that ended with Knight running over two men, killing one, shows there were multiple armed men and his client was fleeing an attacker who had a handgun.  (Patrick T. Fallon/Pool Photo via AP, File)

LOS ANGELES — New video of a fatal parking lot confrontation that led to a murder charge against Marion “Suge” Knight shows the former rap music mogul was being attacked by a man with a gun, his attorneys wrote in a filing seeking a reduction in his $10 million bail.

Tuesday’s filing by attorney Thomas Mesereau states the video, which has not been shown in court, shows that there were several people armed with handguns when Knight was attacked outside a Compton burger stand.

The video is part of a renewed effort to reduce Knight’s $10 million bail on murder and attempted murder charges. It is unclear whether the footage will be shown in court at a bail hearing set for July 17.

Knight has pleaded not guilty in the case and his attorneys have said he was ambushed before running over two men, fatally injuring one of them. Previous attorneys for the Death Row Records co-founder have said video of the confrontation appeared to show one of the men struck by Knight, Cle “Bone” Sloan, was carrying a handgun.

“Mr. Sloan was armed, as were others,” Mesereau’s filing states. “Weapons are visible on the video provided to the court.”

The filing states the video is new, uncut, and hasn’t previously been used in the case. “This video shows (Knight) being viciously attacked and fleeing for his life,” Mesereau’s filing states. “Most significantly, the video discloses one of his attackers brandishing a weapon. When this armed attacker dropped his gun, the video depicts an associate retrieving the weapon and placing it in his waistband.”

Grainy surveillance video showed Sloan dropping an item after he was hit and someone else picking it up, but Sloan has denied he was armed.

“I’m telling this court that I didn’t have a gun,” Sloan testified during Knight’s preliminary hearing on April 13.

The motion also contends that Knight’s criminal history has been overstated by prosecutors, and was accompanied by more than 30 letters from friends, family and associates describing him as a kind, charitable man.

Knight was a key player in the gangster rap scene that flourished in the 1990s, and his Death Row Records label once listed Dr. Dre, Tupac Shakur and Snoop Dogg among its artists. He lost control of the company after it was forced into bankruptcy.

In a separate motion, Mesereau is seeking private medical care for Knight, who suffers from diabetes, high blood pressure and complications from multiple gunshot wounds. Knight, 50, is completely blind in his left eye, partially blind in his right and has been told he may have a brain tumor, Mesereau wrote.

Knight and his attorneys have complained about his medical care at the jail before. Superior Court Judge Ronald Coen told Mesereau on Tuesday before the motion was filed that he was unlikely to order sheriff’s officials to change Knight’s conditions behind bars.

“My view is that I run this courtroom and the sheriff runs the jail,” Coen said.

Knight is scheduled to return to court on July 17.