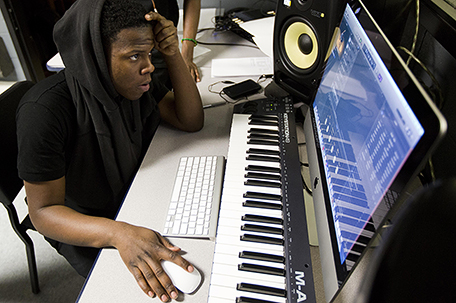 ABOVE PHOTO:  In a Wednesday, March 4, 2015 photo, student Zalmir Deputy makes a recording at Strawberry Mansion High School in Philadelphia. Musician Drake provided the school with the recording studio after seeing an ABC News special about the difficulties at inner-city school.  (AP Photo/Matt Rourke)

A troubled city high school has finally heard the sound of music coming from a recording studio donated by Drake after a monthslong search for a teacher to run it.

The Grammy-winning rapper gave $75,000 to help create the space at Strawberry Mansion High School, district officials said. Drake, a 28-year-old Toronto native, has said he was deeply affected by a news report on the challenges faced by the Philadelphia students.

Although the studio was finished last summer, Principal Linda Cliatt-Wayman said budget problems and the school’s reputation for violence made it hard to find an instructor. At long last, part-time music teacher Ben Diamond arrived in early February.

“We thought we were going to be ready to go in September. They’ve been dying to get in” to the studio, Wayman said of the students. 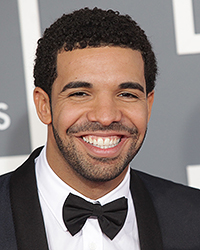 Drake became involved after ABC News aired a program focusing on Wayman’s tough-love efforts to improve the school, which serves one of the city’s poorest and most dangerous neighborhoods. Campus assaults have dropped dramatically since Wayman arrived two years ago, but academics and resources remain a struggle. Less than a quarter of Strawberry Mansion students perform at grade level in math and reading.

When Drake came to Philadelphia during a concert tour in October 2013, he invited members of the school community to a private gathering before the show. There, he surprised them by announcing the gift.

Building the studio meant purchasing new keyboards, acoustical accessories and other equipment, plus cleaning and painting long-disused sound booths at Strawberry Mansion. Members of Drake’s crew completed the work over the summer, according to Wayman.

Yet the gear sat untouched throughout the fall, she said. And when Diamond finally began teaching studio production last month, interest was lukewarm – until Wayman used the school’s public address system to broadcast the debut song recorded in the facility.

That made students realize the long-rumored equipment actually existed, she said. About 50 teens signed up.

“You have to prove everything to them,” said Wayman. “So many people disappoint them.”

Josiah Showell, a junior who specializes in beats, teamed up with freshman Zalmir Deputy on keyboards and senior rapper Jerrick Fripps to record a tune within days of first entering the studio.

Previously, Showell had only composed music on his phone – and he never shared the tracks with anyone. But, he said, “the studio inspired me to bring out the love of music that I have inside me.”

“Without the studio, no one would still know I do music,” said Showell, 17.

The equipment isn’t fancy or expensive, nor was it intended to be, according to Wayman. It offers basic music technology and guidance to a population that might not otherwise have access to it.

“Many of them don’t have very many other reasons to be excited about coming to school,” Diamond said. “To be able to give them an outlet for things they want to express is very special.”

Deputy, 15, thanked Drake for his generosity and hopes the performer might visit one day.

“I really appreciate it … because this is what we needed,” Deputy said.

Representatives for Drake, whose new album “If You’re Reading This It’s Too Late” came out Feb. 13, did not return requests for comment. The rapper is also featured on the song “Amen” by Strawberry Mansion alum Meek Mill.