“STOMP”: A one on one with Jasmine Joyner 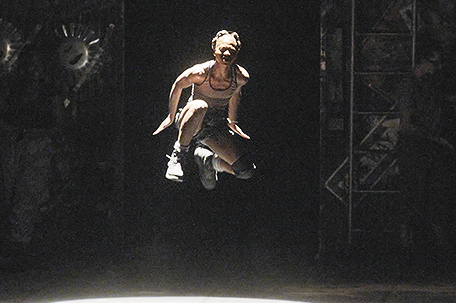 “STOMP” is back and better than ever!

“STOMP” has been entertaining audiences for 27 years with its innovative concept of transforming the things around us into percussive instruments. Created by Luke Cresswell and Steve McNicholas, “STOMP” initially began in the UK as a street performance but has since gone on with its 8-member troupe to perform for sold-out audiences all over the world.  Jasmine Joyner, a lifelong dancer, and performer is one of the “STOMP” tour performers. Joyner sat down with The SUN to share her experience.

Born and raised in Queens, New York, Joyner began performing at the age of 4. Her mother owned a dance studio called Jenn’s Studio 1, where she began training in jazz, ballet, hip hop, tap, African and samba. She went on to study at a performing arts high school and graduated from SUNY Fredonia with a Bachelor of Arts in Dance. Joyner graduated from college in May 2017, auditioned for “STOMP” in June and landed the role by August.

“It was a three-part audition,” Joyner said.  “The first part was about 15 minutes — they did a combination that has to do with body percussion. They wanted to see how well you could hold rhythm. There was a call back for the second part, which was around 30 minutes. We were able to do body percussion and use props like brooms and trash can lids to see how well we could coordinate and move around with them. The third part was a workshop where they gave us a little bit of everything. They gave us a few numbers that we do in the show to see how well we could keep up with the cast and from there they gave us a call.”

“STOMP” is a show with an intense amount of movement that combines drum and dance in non-traditional ways. Joyner shared some of the challenges of incorporating the dance and percussion elements.

“In the beginning it was challenging, because I’m not a drummer, I’m a dancer, but no one has ever really trained to stomp, so that was the best part,” she said. “When you come in everyone starts from square one — regardless of if you’re an actor, drummer, or dancer, with dance, we learn rhythm and we learn sound and we can understand the groove of the music. So that helped a lot, being that I loved acting, jazz and tap classes. With those genres of dance, knowing the rhythm through that and understanding different sounds has allowed me to be successful when it comes to “STOMP.”

Landing a role in “STOMP” is the opportunity of a lifetime. Joyner expressed her gratitude for being part of this incredible show.

“This is the best thing that ever happened to me. I feel like “STOMP” has given me such great opportunities,” she said. “I’ve always dreamed of being on television, and with this, we’ve gotten all this press. I’ve been on “Good Morning America,” “The Today Show,”  “The Apollo,” and have met so many celebrities. Recently they started advertising for “STOMP” again and put up new photos. I’ve always wanted to be in Times Square, and I’m finally in Times Square in New York. It’s a dream come true… it feels unreal.”

After Broadway’s nearly two-year hiatus due to the COVID-19 pandemic, Joyner was elated to return to the stage. She expressed her appreciation for being able to perform again and what the lockdown taught her.

“I’m grateful that we’re able to come back in and put on a show for the people and give them the entertainment that they deserve especially after the last two years of us being on hiatus because of COVID,” she said. “It was a struggle. I’ve tried different jobs outside of performance because performing wasn’t an option, and it didn’t satisfy me. I went through about three jobs and realized it wasn’t my passion or what I wanted to do. Luckily we were able to open back up because I can’t live without dance and performance.”

In addition to the blessing of being in “STOMP” and being able to travel and perform again, the production also helped Joyner find love. Her boyfriend Sean Perham is a percussionist in the show.

“It’s been great,” she said. “We became really close friends during training. He’s a percussionist and I’m a dancer, so we were able to help each other in both ways. I didn’t understand the sticking when it came to drumming, so he helped me with that. Then I helped him with the movement… so it works well.”

Joyner was grateful for the feedback she’s gotten from fans of the show and hopes for audiences in the future.

“I appreciate that after each show that we do on tour, I get messages from people on Instagram saying how happy they were to see the show,” she said. “I’m so thankful for them coming out and supporting us. It’s a good time, something to groove to, it’s interactive because we interact with them to make them feel like they’re a part of the show and it’s funny. I hope audiences get the best experience.”

“STOMP”: A one on one with Jasmine Joyner