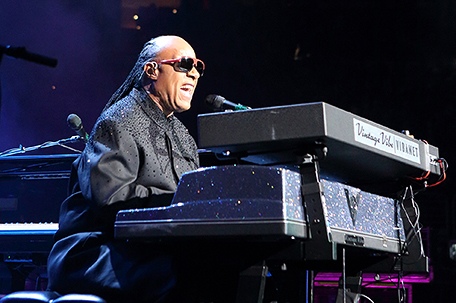 ABOVE PHOTO: Stevie Wonder performs in concert during his “Songs in the Key of Life Tour 2014” at the Wells Fargo Center on Sunday, Nov. 16, 2014, in Philadelphia. (Photo by Owen Sweeney/Invision/AP)

Stevie Wonder made The City of Brotherly Love a stop on his “Songs in the Key of Life Tour,” and anyone who was fortunate enough to be in the Wells Fargo Center in South Philadelphia this past Sunday appreciated the trip!

Hordes of Soul music fans and enthusiasts filled the arena to bear witness to Wonder’s rhythmic ingenuity through piano, harmonica and vocal delights.  Wearing a crystal encrusted all black suit, the entertainer explained his reasoning in creating the album and then made his way to the ivory keys, proving why Wonder is his name.

This concert was all around fun for each person in attendance.  The crowd was ablaze with uproarious jubilation the further Wonder delved into the album, and there was plenty of audience interaction as they sung along, finished verses, and laughed at jokes being made by the musician.  He even gave one of his backup singers a chance to compete with him in a call and response method.  This backup singer, Keith John, not only bared vocal resemblance to Wonder himself, but also happened to be from Philly and is the son of “Little Willie” John, singer and songwriter of the infamous “Fever.”

Having performed this entire album last year at the Nokia Theatre at L.A. Live, I remember being envious of anyone who was in L.A. for the House Full of Toys Holiday Benefit.  When the tour was announced and Philadelphia was made a stop on the 11 venue tour, I knew Stevie made the right choice, as we are a city world renowned for our prolific sound.  He made sure to shout out Kenny Gamble at one point, singing the title of “Ain’t No Stopping Us Now,” the Philly favorite by McFadden and Whitehead.

“Songs in the Key of Life” is the 18th album in Wonder’s discography, yet one he is most fond of.  Originally released in 1976 as a double LP with a four song bonus EP, it is one of the most respected albums of all time.  Staying in the Billboard Albums chart for 80 weeks, it is truly a musical force to be reckoned with.  As he mentioned on stage, a lot of the themes and messages from the album are very much still relevant today, making it a timeless classic.

There were surprise appearances made by singer India.Aire, who made numerous elaborate dress and head wrap changes and performed a beautiful duet of “Ngiculela – Es Una Historia – I Am Singing”, as well as the inspiration behind classic “Isn’t She Lovely,” daughter and background vocalist Aisha Moore.

After intermission, Wonder made sure to poke fun at recent media rumors of his fiancée allegedly being pregnant with triplets, saying to spread the word that he can actually see and made the deal with Berry Gordy to come clean about his blindness in the year of 2014.  He should definitely consider making comedy a regular part of his act.

The atmosphere contained electricity as Wonder became alter ego “DJ Tick Tick Boom,”  creating an encore medley of beloved songs not on the album including: “Do I Do,” “Masterblaster (Jammin’),” “For Once In My Life,” “My Cherie Amour,” “I Just Called to Say I Love You,” and “Superstition.”

Stevie Wonder is the ultimate performer, making all welcome into his sanctuary of love, perseverance, and togetherness, as we all became kin through the musical styling.  It was truly a gift to be in the same room as someone with such ethereal talent and profound humility.  This was definitely a concert for the record books in our city, and one to be cherished for years to come.

R. Kelly to bring his “Love Letter” tour to the Mann

El DeBarge off tour and back to rehab