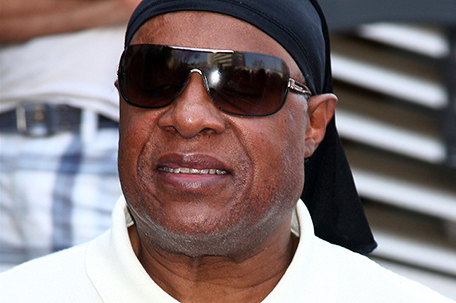 Stevie Wonder and his fiancée Tomeeka Robyn Bracy are expecting triplets after secretly having a baby together last year, The National Enquirer reports.

“Stevie never thought he’d be a father again so late in life,” a source says, adding “it may not have been planned but now he’s excited!”

Another close friend of Wonder’s confirmed that the low-key couple are already parents to a one-year-old. “Stevie and Tomeeka had their first child together last year,” the sources says. “I know because I attended the baby shower.”

Wonder, 64, has eight children to date, and the triplets will put him just shy of a dozen.

“He’s been going to all the doctor’s visits and scans with Tomeeka,” the insider says. “He actually can’t wait until the birth. Stevie missed so much of his other children’s upbringings, he’s vowed to be there for their children and for his soon-to-be new wife.”

The iconic singer, who is prepping for a nationwide tour, divorced his ex-wife of 11 years, Kai Millard Morris, in 2012 after having two children together. He has five other children are from previous relationships.

Nia Long and Ime Udoka are expecting their first child together