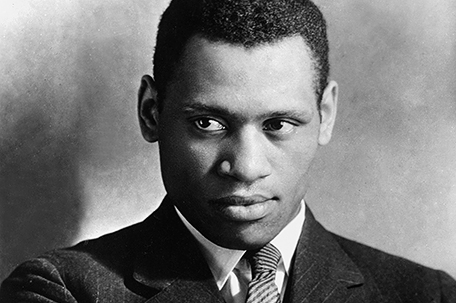 With all the talk of N.W.A, Tupac, Aaliyah, and other biopics of black public figures, I’d say that a Paul Robeson biopic is long overdue, given the man and his accomplishments – frankly, far more-so than any of the previously mentioned. And one just might be coming to a theater near you soon, starring co-star of Showtime’s hit drama series “Homeland,” British actor David Harewood, as Robeson, and Sydney Tamiia Poitier (daughter of Sidney Poitier) as Paul Robeson’s wife, Eslanda (“Essie”) Goode Robeson.

First announced a year ago, South African director Darrell Roodt (“Winnie”) was said to be attached to helm what was shaping up to be a multi-continental production, both in front of and behind the camera. Months later, Vondie Curtis-Hall reportedly took over, replacing Roodt in the director’s chair.

The project hails from Four Stars International, and is to be produced by Greg Carter, and executive produced by Richard Akel, with a script penned by Akel and Terry Bisson, with promises of a film that’s worthy of its subject.

Also of note, Louis Gossett Jr. was to portray W.E.B. Du Bois in the independently-produced film.

The film is expected to be a traditional biopic, showing Robeson’s rise (along with his wife, who was also his business manager) into his 60s. He died at age 77 in 1976.

The goal was to shoot the film last August, in Toronto and Montreal; but it doesn’t appear that photography has actually happened yet, or if it’s even still in the works.

Steve McQueen just might give that production a run for its money (assuming that his project isn’t the above) as the revered filmmaker revealed, via the Guardian (UK), courtesy of Thomson on Hollywood, that he plans to direct a feature film based on the life of Paul Robeson, saying that it will indeed be his next feature directorial effort (he’s currently working on an HBO series, previously covered on this blog).

According to the Guardian, directing a film on Robeson film is his dream project: “His life and legacy was the film I wanted to make the second after Hunger […]  But I didn’t have the power, I didn’t have the juice,” McQueen said.

With an Oscar-winning film on his resume, and the attention of the film world, he certainly has “the juice” now.

Harry Belafonte is involved in the project, although we don’t yet know in what capacity exactly. I’d guess, as a producer/consultant, given that Belafonte and Robeson were pals. McQueen added: “We’re very fortunate that we’re on a roll together to make this dream a reality. Miracles do happen. With Paul Robeson and Harry Belafonte, things have come full circle.”

He didn’t share what actors he may be eyeing for the part.

Depending on when the film is released, and given that it would very likely be high-profile enough, it could very well be another Steve McQueen film that will find itself in Awards season conversations, for whatever that year is.

I wonder who’ll play Oscar Micheaux, since Robeson made his film acting debut in Micheaux’s Body and Soul (1925).

Given the long life that he lived, the events he lived through, the other historically-significant public figures he knew, interacted and worked with, his on-screen and off-screen accomplishments, his activism that would lead to his black-listing, and so much more, there’s a lot of great history here in this one, single life. And a big screen account of that life is one that’s definitely warranted.

I’m definitely excited to see what develops here, whether or not McQueen’s project is something entirely new, or if he might be in fact taking over the existing project that his fellow Brit, David Harewood, is already attached to star in.

But no matter what, I dig this new interest in bringing Robeson’s life to the big screen.