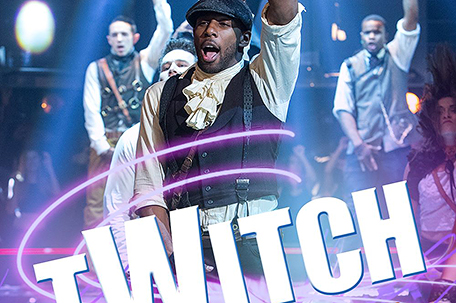 Stephen “tWitch” Boss is a “So You Think You Can Dance” All-Star and fan favorite who continues to make a splash with his multitude of talents. He was also the first dancer endorsed by Gatorade, officially recognizing ‘dance’ as a sport.

Boss is a recurring guest DJ on “Ellen,” serving as Ellen DeGeneres’ sidekick on the show multiple times per week. In that role, he leads the audience in dance competitions and entertains them with comedic skits throughout the show.  He also competes against guests in on-air games.

A featured dancer in the films Blades of Glory and Hairspray, Boss teamed up with Paramount and Funnyordie.com to film several viral videos for the dance spoof film Dance Flick (2009). And he co-starred in Stomp the Yard 2: Homecoming and guest-starred on such television series as “Drop Dead Diva,” “Bones” and “Touch,” too.

Boss originally found fame when he won over critics and fans alike with his amazing performances on Season 4 of “So You Think You Can Dance,” earning the runner-up title. In addition, his memorable performance in “Mercy” alongside Katee Shean was nominated for a 2009 Primetime Emmy Award for Outstanding Choreography.

In 2010, Boss was invited back for a special All-Star Season 7. This would prove to be a very important year in his life, as he met fellow All-Star dancer Allison Holker and they would ultimately marry. What’s more, Boss’ hip-hop performance of “Get Outta Yo Mind” with classically trained contestant Alex Wong won the Emmy in the Outstanding Choreography category. In the season finale, Ellen DeGeneres stepped in for an injured Wong to recreate the award-winning dance for a surprised audience. Boss has continued to dance, choreograph, and even judge on subsequent seasons of the show.

Boss’ passion for dancing goes back to childhood. Boss was born and raised in Montgomery, Alabama, where, he mastered “popping and ticking,” a popular hip-hop style that resembles a twitch, earning him the nickname “tWitch.” In 2000, he graduated from Lee High School and went on to study Dance Performance at Southern Union State Community College in Wadley. He then moved to California and continued to study dance at Chapman University.

Boss and his wife currently reside in Los Angeles where, in his free time, he serves on the board of the Dizzy Feet Foundation, a charity which affords access to dance education for the underprivileged. Here, Boss talks about reprising the role of Jason in Step Up All In, the fifth installment in the dance flick franchise.

Kam Williams: Hi tWitch, thanks for the interview.

Stephen “tWitch” Boss: Thanks for having me.

KW: Congratulations on the fifth installment in the franchise. How do you explain the Step Up series’ enduring popularity?

StB: Dancing is one of the purest forms of expression! So when you bring top-of-the-line dancers, top-of-the-line choreography, amazing music, and incredible cameras you can’t help but get an awesome and infectious product.

KW: How do you keep your character, Jason, fresh?

StB: My character, Jason, is an ever-evolving individual. We have seen Jason evolve since the third installation of Step Up. He lived in New York where he struggled to make ends meet, then went back home to Miami to help out his family. Since then he has moved to Los Angeles to yet again pursue a dream. I tap into Jason and keep him fresh by paralleling his real-life with mine because my dreams are still evolving as well.

KW: Which do you enjoy more, acting or dancing?

StB: That’s actually a very hard question to answer. They are both avenues and mediums of performance, and it is performance that I am most passionate about. There is nothing like the feeling I get when I step out on the dance floor and dance to my favorite song. And at the same time there’s nothing like the feeling of doing homework on a character and stepping onto the stage or camera and being another person.

StB: I think people will take away the message of family and perseverance. Perseverance in the face of perceived defeat is absolutely essential. And while everyone’s journey is different, completely alienating yourself in the pursuit of your dreams could be somewhat harmful. Therefore, having family or loved ones around you to keep you grounded could be a very good look. Oh yeah… and when in doubt, dance it out!

KW: What’s more fun, making a movie about a dance competition or participating in a dance contest on a reality show?

StB: Definitely making a movie, because no one is in fear of being voted off and going home early.

KW: Do you ever worry about being typecast as just a dancer?

StB: All the time. But with that I recognize that I work so hard to establish myself in the field of dance. It just takes that one time, that one person that will give you a chance to deliver on something that is unknown, and that will be my launching point.

StB: My wife and I have a mean, apricot pork chop recipe.

StB: Continuing to establish home and family life. Putting together the home-base.

StB: I see me. That is the culmination of all the decisions and paths I have decided to take thus far. There are times I see power, struggle, uncertainty, and art; souvenirs from my life journey that remind me where I’ve been.

StB: An unwavering agreement of peace and love all over the globe.

StB: I learned that I couldn’t go through life holding a grudge. It’s senseless and, more than anything, I was actually hurting myself. Playing the blame game when it comes to relationships is very easy, so I learned that I am 50% of a relationship and it wasn’t just the other person’s fault.

StB: Ha ha ha! The person you see on the red carpet is far more dressed up than the person you would see at home. At home you’re lucky if I have sweatpants on.

StB: As the person who had enough love to wrap the globe over four times.

KW: Thanks again for the time, tWitch, and best of luck with the film.

StB: Thank you so much, Kam.

To see a trailer for Step Up All In, visit: https://www.youtube.com/watch?v=M1h_1yoVqVU