STEP carries audiences away with Q&A 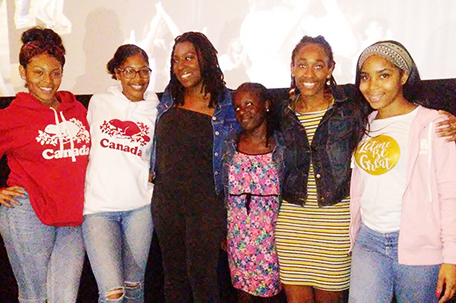 Dance is one of the art forms that is simply mesmerizing. When mastered, watching a dancer perform their trade, getting all the moves and contortions right in a seemingly effortless way is something to be admired and revered. This is no different for the young women of the Baltimore Leadership School for Young Women BLISS Step Team. These women were a part of the inaugural class to graduate from the school, and fortunate enough to have their tale of dance, determination, and strength told across the country through the documentary “STEP,” directed by Amanda Lipitz.

The documentary follows the lives of three high school seniors: Blessin Giraldo, Cori Grainger, and Tayla Solomon, and how they navigate the demands of classes, college prep, and personal adversity. The step team — founded by Blessin Giraldo while she was in the 6th grade — is their way to escape the issues going on at home or in school, and their outlet to leave it all on the floor. They enjoy the unwavering support of guidance counselor Paula Dofat, who works around the clock to make sure the young ladies get accepted into college and can pay for their education. Geri McIntyre, affectionately known as Coach G, is their step team coach who doesn’t expect any less than an exceptional work ethic from the young women.

We enter the story during a year in their lives that is one of the most stressful senior year.  Between managing and maintaining grades, keeping a decent GPA, dating, family life, and applying to and paying for college, the stress can take a toll. When the power is out and there’s no food in the fridge, stress can take a toll. The BLISS Step Team is the ladies’ outlet. They don’t have to worry about those issues for the period of time they are spending preparing for the biggest step competition of the year — the one they’ve never placed in, let alone won. They must come together and leave their differences behind to create a step that captures the audience and wins the hearts of the judges.

After viewing this emotional and inspiring documentary, I was granted the opportunity to speak to these women about the documentary and their lives. Blessin, Cori, Tayla, and Coach G joined me on the prepared stage of the Ritz East Theater to discuss the success of their film and how it has impacted their lives to date. After we talked, the discussion was open to the audience, full of excited girls eager to ask their new idols a question about their educational and life journeys.

Coach G spoke about being inspired to teach the young women to step and incorporating life lessons into the practice: “Three months prior to me accepting the role as STEP coach, I sat down and prayed and said I really wanna change the dynamic of youth and young women in the world…there’s so many influences that young women look up to that’s not real and I know the love and support I grew up with” she said. “I really truly felt if you do everything with love, likes on Instagram do not matter.”  After denying the position of step coach twice, Coach G realized that’s where she belonged. “That’s where I’m truly doing the work of God and that God has called me to do and I really thank God for putting me in their lives and they have truly taught me more than I have taught them,” she said.

Self-esteem, sisterhood, and solidarity are three things that are pertinent to everything the young women learn in STEP, and this follows them throughout the course of thehe film. In the movie, we see a gradual change in the way all three young women approach adversity, handle conflict, and overcome personal hardships to become their best selves.

Blessin was a crowd favorite, as her outspoken personality and creativity shined throughout. “Something that motivates me all the time is just remembering what I expect of myself, and that success is something that is defined by you,” she said. “I can’t control my poverty or the family I was born into, but I can control what I wanna do with the rest of my life, and that is something that keeps me going.”

Cori Grainger is a wonderful example of a young woman holding fast to her dreams and making them a reality. The oldest of seven siblings in a blended family, she must set the standard of excellence for her younger siblings, going to college is no exception of that. With her competitive and quiet nature, mixed with sheer discipline, the young lady handles power outages and past due bills in a masterful way, and finds herself in her dream institution. When asked how her siblings create success in their own lives, Cori said, “My little brother tells me all the time now he wants to go to Johns Hopkins and he’s only in the second grade, so that’s definitely something that keeps me going, just setting the bar high. I went through a lot of struggles growing up, and I don’t want my family to stay in the position that we saw in the movie, we are doing a lot better, we actually just purchased our first home. Education was something extremely important and now I try to implement it with my younger siblings. They motivate me but I also motivate them.”

Tayla Solomon’s story is not one of hardship, but still very relatable as she has an overprotective diehard mother who would travel through hell and high water to see her child succeed. Her mother is a corrections officer in Baltimore County and brings some of that discipline into raising Tayla as is seen in the film. When it comes to education, her mother is no joke, anything less than an A and she is not having it! While her mother’s rambunctious personality may annoy and embarrass Tayla at times, she is her biggest cheerleader. After watching the film, Tayla realizes it allowed her to open up more. “To be more supportive and encouraging to others and I realize that other people go through things, I normally seem like I only care about myself, but that’s not true, I care about everyone and what they’re going through and so not only do we [the three of us] talk, but the 19 of us on the team, we all talk about what’s going on with us so basically it’s just a big sisterhood,” she said.

That sisterhood is reflected throughout the movie. We see a progression in the way the women interact with each other and manage conflict resolution, making them a force to be reckoned with up to the final performance and onto the graduation stage.

These young women’s tales of triumph are so inspiring for any young woman battling with the world around them, as there is always an artistic outlet to set yourself free. “STEP” is life for the women of the Bliss Step Team, and it takes them far beyond the competition arena. This movie will have audiences leaving the theater wanting to express their art to the world in hopes that it serves as a healing and guiding aid to their success, allowing them to become stronger and overcome the adversity around them. Be encouraged to take a young woman to see the  documentary “STEP.” They will leave with a stronger sense of purpose, and a deeper “go-getter” mentality.