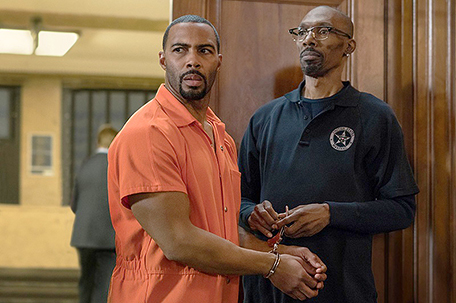 ABOVE PHOTO:  Omari Hardwick (“Ghost”) with the late Charlie Murphy in a scene from the upcoming fourth season of “Power”.

The late Charlie Murphy (who passed away on April 12), as well as Larenz Tate and “Hamilton” star Brandon Victor Dixon, are all new members of the cast of Starz’s hit drama series “Power” for its upcoming fourth season, which begins this summer.

Season Four will open with Ghost behind bars, following his highly publicized arrest by his ex-girlfriend, Assistant U.S. Attorney Angela Valdes, for the murder of FBI Agent Greg Knox – a crime he did not commit. Ghost can’t outrun his past choices and mounting enemies this season, which threaten his freedom and his family’s safety at every turn. His fight for redemption brings him face-to-face with the Feds, the media, new allies, and old foes. But the biggest obstacle for Ghost remains himself and his internal struggle between the man he wants to be and the one he really is.

“Power” season three was the most-watched Starz original series ever, with a record of 7.1M viewers across all platforms and counting. The #1 original Starz drama also ranked #1 among all weekend cable programs for African-American viewers during the third season during the summer of 2016.

The series has been a strong performer for Starz, defying gravity and only getting stronger from season to season. Just take a look at the growth in viewership from its first to its third season in the comparison image below:

It kicked off its first season with just over 500,000 live viewers; and by the end of Season Three, that figure had grown four-fold to just north of 2 million live viewers. That’s excellent, and maybe not talked about enough. Typically, a new series will either continue to draw similar numbers during successive seasons, or interest will gradually fade, and live viewership will decline over time. It’s not often that a series grows four-fold in viewership in three seasons.

Needless to say, anticipation for Season Four of “Power” is high. What continues to elude the series however is critical acclaim by way of top TV industry awards like the Emmys, SAG or Golden Globes, to name three. But whether that’s of concern for the show’s producers and/or the network, we can’t say. Obviously, a hit series that comes with awards recognition is desirable, but just having a hit series in the current climate of “peak TV” and numerous other distractions, is its own achievement.

TV One highlights upcoming programming schedule, including a new primetime talk show and season two of the hit series, “Uncensored”