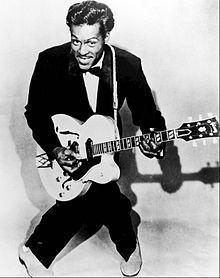 ST. LOUIS (AP) — St. Louis is planning to convert Chuck Berry’s one-time home into a museum and to create a cultural district around it honoring the rock ‘n’ roll legend and other prominent African Americans who have lived in that part of the city.

The city on Monday solicited bids for the project, which will be centered around the home at 3137 Whittier St. in north St. Louis where Berry lived for eight years in the 1950s. During that time, he wrote many of his biggest hits, including “Maybelline,” ″Roll Over Beethoven,” ″Sweet Little Sixteen” and “Johnny B. Goode.”

The museum would anchor a “Chuck Berry Cultural District,” to honor Berry, who died in March at age 90, and the area’s African-American heritage.

The neighborhood known as “The Greater Ville” was among the few areas of segregated St. Louis where blacks could own property in the early to mid-1950s. It was home to many famous figures in addition to Berry, including singers Josephine Baker and Tina Turner, comedian Dick Gregory and tennis star Arthur Ashe.

Berry, a lifelong resident of St. Louis, moved from the one-story red brick home in 1958, but he continued to perform regularly at a club not far from his 1950s home until shortly before his death.

“Many of my favorite songs came about while in that house,” Berry said in 2008, when the home was added to the National Register of Historic Places.

The city has owned the home since 2010, though it is currently is disrepair. The St. Louis Development Corp. said on its website that it wants to develop a destination museum and redevelop the neighborhood to “catalyze housing investment and foster connections to our City’s cultural and music heritage.”

Developers have until July 10 to submit ideas. The city said tax credits and other incentives may be available.