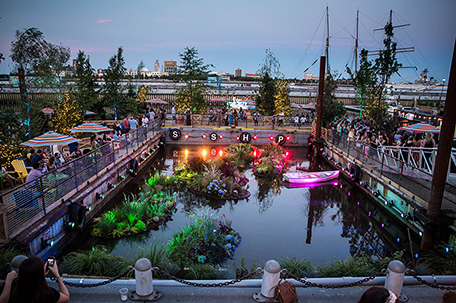 Due to popular demand, Spruce Street Harbor Park will remain open for one more month, through Sunday, September 28.

The public has spoken, and the good people of the Delaware River Waterfront Corporation — the nonprofit group operating the pop-up park — have listened.

That’s right: there’s now one more month to lounge in hammocks, play shuffleboard, stroll beneath misters, sip a beer on the floating restaurant, and take selfies in front of the LED lights.

All of the current hours will remain the same, and there may even be some seasonal activities in the works.

And we truly couldn’t be more thrilled about the extension.

Without a doubt, Spruce Street Harbor Park’s presence at Penn’s Landing on the Delaware River waterfront has been a resounding success.

Conceived as a two-month-long placemaking installation, the park has done so much more than merely attract Philadelphians and visitors to the river. Spruce Street Harbor Park has served as a clear reminder of just how amazing this city’s waterfront can be, and in the process garnered support for future developments all along the Delaware River (hello, Washington Avenue Pier and Pier 68).

If you, too, have loved spending time on the waterfront this summer, let the Delaware River Waterfront Corporation know via Twitter at @Penns_Landing or email.

But don’t wait until September 27 to get out there and enjoy the park! Remember, the space is still temporary and will close up for the season at the end of the month.

For now, though, let’s all just head down to the waterfront and soak up the good times to be had at the stupendous Spruce Street Harbor Park.