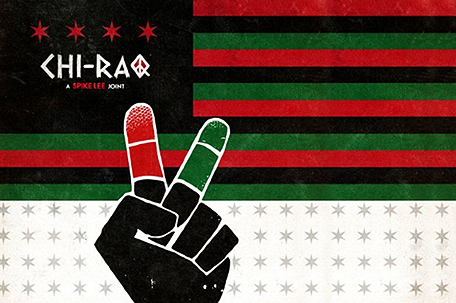 Possibly in consideration of an Awards season run as an Oscar qualifyer (pre-screenings for the film have apparently impressed audiences so far.) Amazon Studios has set the release date for Spike Lee’s curious Chi-Raq, for December 4, in a theatrical release deal that involves both Roadside Attractions and Lionsgate (another sign that expectations for the film are high).

As reported earlier this year, a 2016 Cannes Film Festival debut was initially eyed, but Lee and Amazon have been very high on the project, that they instead opted for a spot in this year’s awards race. Following a qualifying run in December, the movie will likely officially open wider after the new year, and possibly become available on Amazon for Prime subscribers to stream (unlike Netflix, which made its Oscar contender, Beasts of No Nation, a simultaneous theatrical and streaming release).

Chi-Raq was said to be a “working title” – meaning, it might be called something else entirely for the film’s eventual release, which would make sense, given all the criticism Spike has faced over the use of the derogatory term, in reference to Chicago (the city at the center of the story he’s telling). But this close to its release, I’m assuming there won’t be any title change.

In what could be a breakout role, Parris is playing the central character, in a story set against the backdrop of Chicago’s gun violence, and said to be a modern spin on the Greek comedy “Lysistrata” – in short, the women of Greece refused to have sex with their husbands, all in an effort to bring an end to the Peloponnesian War via the signing of a peace treaty. In Lee’s film, the story will center on a woman’s quest to end gang warfare in Chicago, likely via similar methods as used by Lysistrata and it all unfolds as a musical comedy.

Written by Lee and writer/director Kevin Willmott (C.S.A.: Confederate States Of America), Chi-Raq will shed light on “the serious, but often overlooked issue of violence in inner city Chicago.”

“Spike Lee is one of the most distinct and visionary filmmakers of our time,” said Ted Hope, Head of Motion Picture Production at Amazon Studios at the time of the film’s pick-up. “It would be impossible to find a better filmmaker with whom to launch our studio. He has a unique voice, a distinct eye, and he tackles important subjects with humor and heart, pointing to solutions and not exploiting the problems. Chi-Raq may be his greatest, and definitely his boldest film yet–everything about it is distinctive.”

“I’m honored to be part of the film that will launch Amazon Studios and to tell a story that is so important. Please don’t be fooled by the title of Chi-Raq. This new Spike Lee joint will be something very special. We have assembled a stellar cast,” Lee added.

Today’s news means that a trailer should be arriving very soon, and I can’t wait!

“Deadline” was first to report the news of the film’s release date & strategy.