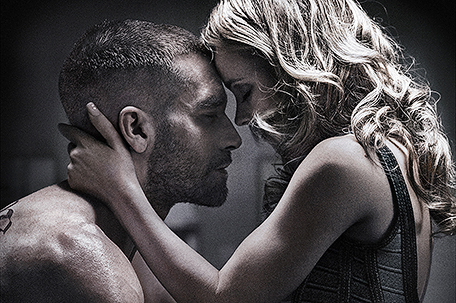 ABOVE PHOTO:  Rachel Adams and Jake Gyllenhaal in Southpaw.

Billy Hope (Jake Gyllenhaal) surmounted incredible odds en route to becoming the World Light Heavyweight Boxing Champ. After all, his prospects weren’t exactly brilliant, given how he’d been abandoned by his mother at birth.

But he was lucky enough to meet Maureen (Rachel McAdams) while they were being raised in an orphanage in New York’s Hell’s Kitchen. For, the two would not only fall madly in love but she would serve as the rock who kept his nose clean after a couple of brief stints behind bars.

As Billy worked his way up the boxing ranks, the childhood sweethearts married and had a daughter, Leila (Oona Laurence). And Maureen repeatedly inspired her husband to climb into the ring to channel his aggression positively, rather than entertain any ideas of blowing off steam in self-destructive fashion.

By the time his record reached 43-0, Billy and family family were living beyond their means in a gaudy McMansion where they conspicuously consumed the trappings of the nouveau riche: the flashy cars, the gaudy bling, the expensive champagne, and so forth. However, between his parasitic entourage and a shady money manager, Jordan Mains (50 Cent), it was also readily apparent that he’d have to keep winning bouts to maintain the decadent lifestyle.

Sure enough, in the wake of a terrible personal tragedy, Billy did lose the title belt and, faster than a Don King haircut, found himself broke and back on the rough streets he’d worked so hard to escape. Abandoned by his hangers-on and by his fair-weather manager for the #1 contender (Miguel Gomez), he ends up at a gym in Harlem run by Tick Willis (Forest Whitaker), an irascible trainer reminiscent of the character played by Burgess Meredith in Rocky. The salty veteran on the verge of retirement reluctantly agrees to take on the reclamation project on the condition that the brawler’s willing to add a little finesse to his pugilistic repertoire.

F. Scott Fitzgerald famously once uttered, “There are no second acts in American lives.” Well, he obviously never met Billy Hope who endeavors to make the most of a shot at redemption in Southpaw.

Directed by Antoine Fuqua, the film features yet another nonpareil performance by Jake Gyllenhaal who deserved Academy Award nominations for both Nightcrawler (2014) and Prisoners (2013). He is again nothing short of mesmerizing, here, as a desperate, deposed, disgraced champ on an appointed mission to reclaim his throne and his fortune.

To see a trailer for Southpaw, visit: https://www.youtube.com/watch?v=QBBi02IXlbw