‘Solo’ sputters in takeoff with $83.3M at box office 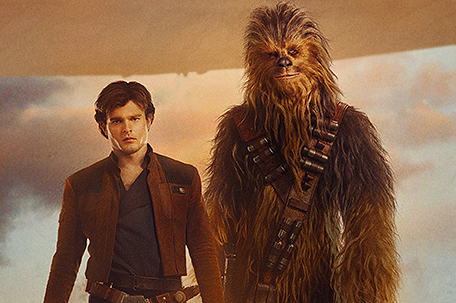 NEW YORK — In the largest disturbance yet in Disney’s otherwise lucrative reign over “Star Wars,” the Han Solo spinoff “Solo: A Star Wars Story” opened well below expectations with a franchise-low $83.3 million in ticket sales over the three-day weekend in North American theaters.

Disney estimated Sunday that “Solo” will gross $101 million over the four-day Memorial Day weekend, a figure below even the opening weekends of the much-derided “Star Wars” prequels. Last week, forecasts ran as high as $150 million for the four-day haul of “Solo.”

Overseas ticket sales were even worse. “Solo,” starring Alden Ehrenreich in the role made iconic by Harrison Ford, grossed $65 million internationally in its opening weekend, including a paltry $10.1 million in China.

“Of course we would have hoped for this to be a bit bigger,” said Dave Hollis, Disney’s distribution chief. “We’re encouraged by the response that people have had to the film. It got a good CinemaScore (A-minus). The exits are very encouraging.”

“Solo” came in with a Millennium Falcon’s worth of baggage following the mid-production firing of directors Phil Lord and Christopher Miller, who were replaced by Ron Howard. With the rejiggered production, the budget soared well past $250 million.

But the cause of the spinoff’s disappointing performance may have had as much to do with “Star Wars” fatigue (“The Last Jedi” exited theaters just last month) and the stiffer competition of a summer holiday weekend. While no major releases dared to open against “Solo,” Fox’s “Deadpool 2” moved its release date up a week ahead of “Solo.”

The gambit may have hurt both releases. After debuting with $125 million last weekend, the R-rated Ryan Reynolds sequel dropped 66 percent to second place with $42.7 million and an estimated $53.5 million four-day haul.

“Solo” notched the biggest Memorial Day weekend opening in several years, but it also came on the heels of a pair of a summer-sized blockbusters — “Deadpool 2” and Disney’s own “Avengers Infinity War” — making for an unusually crowded May. “Infinity War” added $16.5 million in its fifth weekend to bring its domestic total to $621.7 million and its global sales to $1.9 billion — both among the highest of all-time.

“It is a business that is built on momentum but also one where people probably are only able to get to theaters a certain number of weeks in a row,” said Hollis.

But there were also questions beyond the effect the calendar had on “Solo.” While reviews were generally positive (71 percent “fresh” on Rotten Tomatoes), there was little about “Solo” that made the movie a must-see event.

Fans were skeptical of Ehrenreich and uncertain about the dismissal of Lord and Miller (the popular filmmaking duo behind “21 Jump Street” and “The Lego Movie”). Unlike any “Star Wars” release before, “Solo” was deemed — gasp — skippable. 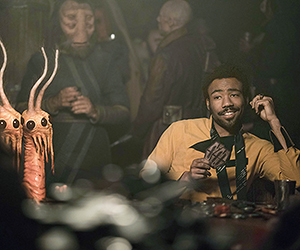 As it arrived in theaters, Disney might have been wishing it had instead made a Lando Calrissian spinoff with the red-hot Donald Glover, the star of TV’s “Atlanta.” In the days ahead of release, Lucasfilm President Kathleen Kennedy said a Lando movie is a possibility.

While the original “Star Wars” films helped define the summer moviegoing experience, Disney released their previous three “Star Wars” films in December. What most hurt “Solo” was the “fatigue factor” of a May “Star Wars” film following a December one, said Paul Dergarabedian, senior media analyst for comScore.

“It’s the compressed time frame between the two ‘Star Wars’ films and the highly competitive nature of this marketplace. It is summer, after all,” said Dergarabedian. “The good news is that the next film isn’t until December 2019. That’s plenty of breathing space. I think part of the allure of the ‘Star Wars’ brand in the past has been the long wait.”

That time might also be valuable for Lucasfilm and Disney to find a way to counter the diminishing returns of its multi-billion-dollar franchise. To help propel “Solo” internationally, Disney brought the film to Cannes Film Festival, flooding the French film festival’s red carpet with Storm Troopers.

“The Last Jedi” also flopped in China (it was pulled from theaters after a week), and Rian Johnson’s movie — even though it grossed $1.3 billion worldwide — showed relatively weak legs at the box office, while proving divisive among “Star Wars” die-hards.

The magic around a “Star Wars” film may be fading. To right the ship on Episode 9, Lucasfilm has turned to an old friend: “The Force Awakens” director J.J. Abrams. He, too, is replacing a fired director after Colin Trevorrow departed last fall.