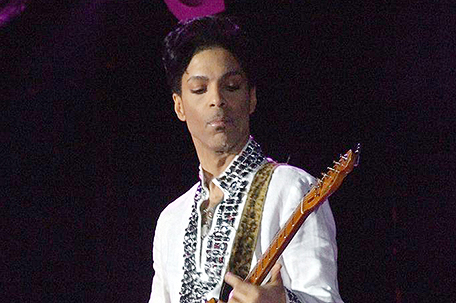 NEW YORK — Prince announced he’s writing his memoir, told the audience he was leaving to change clothes and came back to perform songs for the feverish New York City crowd.

Prince said on Friday that his book – with the working title “The Beautiful Ones” – will be released next year by publishing house Spiegel & Grau.

“If you don’t mind, I’m going to go home and change real quick and come back and party with y’all,” Prince said.

He returned to the dark room to perform for the audience, which included Harry Belafonte, Trevor Noah, R&B singer Maxwell, journalists and music industry players. Now in another ensemble, Prince performed on piano from the second level of the venue, as the crowd looked up and sang along to songs like “When Doves Cry,” ‘’If I Was Your Girlfriend,” ‘’Let’s Work,” ‘’Hot Thing” and “All the Critics Love U In New York.”

“New York, do you want to play with me?” yelled Prince, who was getting help from a DJ when performing. “You know how many hits we got? You know how long we gon’ be here? It’s time to jam!”

Dancers also were on the second level with Prince, and at one point he put his leg over the railing and stuck his microphone out to the crowd.

Before his performance, the pop icon said Spiegel & Grau made him “an offer I can’t refuse.”

He added that the book will start with his first memory.

“This is my first (book). My brother Dan is helping me with it. He’s a good critic and that’s what I need. He’s not a ‘yes’ man at all and he’s really helping me get through this,” Prince told the audience.

“We’re starting from the beginning from my first memory, and hopefully we can go all the way up to the Super Bowl,” he said.

At one point Prince asked the crowd: “You all still read books right?”

According to a press release about the memoir released Friday, “Prince will take readers on an unconventional and poetic journey through his life and creative work.” It says the book will include stories about Prince’s music and “the family that shaped him and the people, places, and ideas that fired his creative imagination.”

The 57-year-old Minneapolis-born Prince is one of the most successful musical acts of all-time. He has released four albums in the last 18 months, including two on the Tidal streaming service last year.

New York-based Spiegel & Grau is an imprint of Penguin Random House. The book will be released in the fall of 2017.