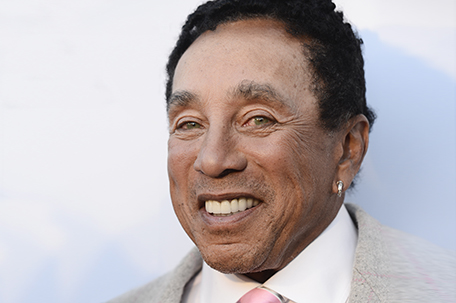 ABOVE PHOTO:  Smokey Robinson  (Photo by Dan Steinberg/Invision for The Thalians/AP Images)

WASHINGTON — Whether he was singing his own compositions or writing for other artists, Smokey Robinson was instrumental in shaping the Motown sound that changed American popular music in the 1960s. Now, his accomplishments have won him the pop music prize from the national library.

The Library of Congress announced Tuesday that Robinson, 76, is this year’s recipient of the Gershwin Prize for Popular Song. The lifetime achievement award is named for the duo of George and Ira Gershwin and was created by Congress to honor songwriters who entertain, inform and inspire. Past recipients include Billy Joel, Paul McCartney, Willie Nelson and Stevie Wonder.

Robinson has writing credits on more than 4,000 songs, and was behind some of the biggest hits in Motown history. As the lead singer of the Miracles, he wrote and performed “You’ve Really Got a Hold on Me,” ‘’The Tracks of My Tears” and “I Second That Emotion.” He also wrote some of the Temptations’ best-known songs, including “My Girl,” ‘’Get Ready” and “The Way You Do the Things You Do.”

“It gives me such joy and gratitude to be included among the past recipients of this most prestigious songwriting award,” Robinson said in a statement.

Robinson still performs regularly and was in Washington on Monday night as part of the lineup for annual “Capitol Fourth” concert on the lawn of the Capitol.

Born in Detroit, Robinson collaborated closely with Motown founder Berry Gordy, working as a producer and talent scout in addition to his songwriting duties. He was the label’s vice president for nearly 30 years.

In addition to the Temptations, he wrote for Marvin Gaye, Brenda Holloway and the Marvelettes, among others, and the Beatles, the Rolling Stones and Michael Jackson are among the artists who’ve cited him as an influence.

“His rich melodies are works of art – enduring, meaningful and powerful. And he is a master at crafting lyrics that speak to the heart and soul, expressing ordinary themes in an extraordinary way,” acting Librarian of Congress David Mao said in a statement. “It is that quality in his music that makes him one of the greatest poetic songwriters of our time.”

Robinson will accept the prize in Washington in November.

Keith Robinson of “Get On Up!” Here’s to You, Mr. Robinson!