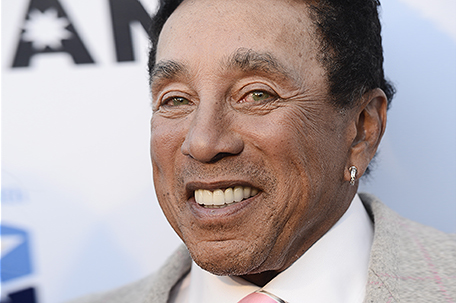 ABOVE PHOTO:  Smokey Robinson  (Dan Steinberg/Invision for The Thalians/AP Images)

A claim filed by Claudette Robinson, ex-wife of Motown pied-piper Smokey Robinson, alleges that not only is she entitled to 50 percent of his compositions, but that her ex-husband has breached fiduciary duty, committed constructive fraud, and anticipatorily breached the terms of a 1989 stipulated judgment made three years after their divorce.

The ex-Mrs Robinson’s claim is in response to a claim originated by a lawsuit filed by her former husband in March seeking declaratory relief so he wouldn’t have to share his reclaimed rights.

The filings are derived from a provision of the 1976 Copyright Act; a termination provision which Congress enacted to extend the term of copyright so artists who had handed their rights over without much bargaining power is provided another chance to enjoy the fruits of early career stage labors.

Smokey Robinson’s remarkable career has produced hits such as “Cruisin,” My Girl,” and “You’ve Really Got a Hold on Me”

But the outcome from the current dispute with ex-wife Claudette Robinson could create a new road block for other artists in the same position in the future.

The Robinsons were married for 27 years between 1957 and 1986. They had two children together. They sang together as part of The Miracles, but Claudette says that in 1964, she stopped touring to be able to take care of the kids.

Now, the question arises whether recaptured copyrights should be defined as community property or separate property under California family law.

According to Smokey’s lawyers, the ex-wife isn’t entitled to the music, and her notice to the contrary, could “jeopardize” his ability to secure new agreements exploiting his newly recovered rights.

As part of the stipulated judgment, Smokey Robinson was given the right to administer and exploit his songs, but also promised he would “not maliciously or willfully take any action with a view of damaging” his ex-wife’s interest.

As a result, it’s alleged that the singer has breached his fiduciary duty by “willfully taking steps to usurp Ms. Robinson’s valuable rights.”

Actor Terrence Howard accused of punching ex-wife in the face

Caught in a data breach? How to reclaim control of your credit and identity