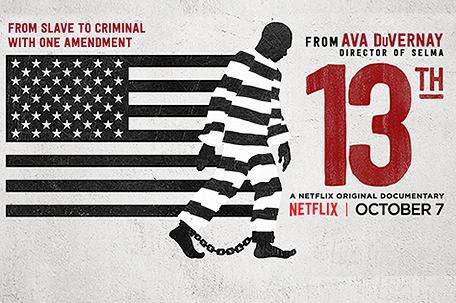 I certainly haven’t seen Ava DuVernay’s new documentary “The 13th,” which is set to open the New York Film Festival this weekend, before heading to theaters and premiering on Netflix on October 7th. However, the little I’ve read about the film thus far (its synopsis, the filmmaker’s stated motivations in making it, reactions to the film from those who’ve seen it, as well as its title), evokes Sam Pollard’s eye-opening 2012 feature documentary “Slavery By Another Name” and Angela Davis’ 1997 speech, “The Prison Industrial Complex,” later released as an audio CD that served as the basis for her book of the same title.

DuVernay’s film, “The 13th,” seems to act as a bridge between the ignored truths both Pollard and Davis uncover in their respective works: Pollard’s, based on Douglas A. Blackmon’s literary exposé on what he dubbed an “Age of Neo-Slavery” that thrived from the aftermath of the Civil War, and the passing of the 13th Amendment which abolished slavery in the United States and provides that “Neither slavery nor involuntary servitude, except as a punishment for crime whereof the party shall have been duly convicted, shall exist within the United States…,” through the dawn of World War II; and Davis’ “Prison Industrial Complex,” which takes on a faulty USA legal system, with prison systems that have grown at a rate unparalleled in history, creating what is effectively a modernized slave labor system, with direct connections to slavery as we’ve known it.

DuVernay’s “The 13th” (referring to the 13th Amendment to the Constitution), as its synopsis states, chronicles the history of racial inequality in the United States, examining how the country has produced the highest rate of incarceration in the world – the majority of those imprisoned being African American. I’m certainly looking forward to seeing it. But in evoking Pollard’s documentary and Davis’ speech, I thought I’d recommend that you take a look at both while you wait for “The 13th.” Or watch them after you see “The 13th” as potential companion pieces. “Slavery By Another Name” is readily available (it’s embedded below, in full). And you can find Davis’ “The Prison Industrial Complex” in book and audio form (you’d have to buy either); she has spoken publicly on the subject a number of times over the years, and thankfully some of those speeches were videotaped. You’ll find a 2003 presentation she gave at Florida International University, aptly titled “Slavery and the Prison Industrial Complex.”

Pollard’s film– based on the 2009 Pulitzer Prize-winning book of the same name by Wall Street Journal writer Douglas Blackmon– challenges the assumptions that slavery ended with Emancipation Proclamation of 1863. The film tells how even as chattel slavery came to an end in the South in 1865, thousands of African Americans were forced back into labor with brutality.

Directed by the long-time Spike Lee editor (as well as director and producer in his own right), it incorporates re-enactments, interviews with historians and descendants of both the slavers and the enslaved, and narrated by Laurence Fishburne, the 90-minute film chronicles the years after the Civil War, when treacherous new forms of forced labor emerged in the American South. White American backlash against Emancipation and Reconstruction kept hundreds of thousands of African Americans in bondage.

Thanks to Blackmon’s extensive research, the film details the conspiracy by southern whites after the Civil War, who manipulated a morally corrupt judicial system (in part due to the legal exploitation of a single clause in the 13th Amendment), all in an effort to keep blacks enslaved. At first free after Emancipation, they were then forced back into involuntary bondage, to work in the mines, quarries, lumber camps and urban factories – either as convicts based on extremely tenuous charges, or in nebulous forms of never-ending debt known as peonage and were forced to work off that debt.

The roots of Black America’s deeply-seated suspicions of the criminal justice system are very-well illuminated here and particularly timely to revisit in light of recent/current events; the rampant imprisonment of Black men today has its history in an economic system that depended on human savagery and coerced labor, and the film challenges the seemingly global belief that black Americans tend toward lawlessness.

It also tells stories of the courageous men and women who fought tirelessly against these disreputable practices, eventually proving to be successful.

Uncovering many experiences of slaves and their descendants, and painting a devastating picture of the unsightly and horrific practices that kept hundreds of thousands of Black Americans enslaved for many decades after slavery was abolished, “Slavery By Another Name” provides an eye-opening account of a significant– yet so rarely talked about– chapter of American history during which Blacks were subject to racial degradation in the service of white supremacy and provided cheap labor, helping to explain some of the reasons why Black Americans made so little economic progress before the Civil Rights Movement of the 60s– the effects of which still reverberate today.

In short, it should enlighten and then rightfully upset you after you see it, as DuVernay’s film I suspect will as well.

Although the book it’s based on is even more comprehensive, incisive and inciting.

The documentary is available on DVD, which you can buy or rent, but thankfully PBS has made it available online. Afterward, watch Angela Davis’ 2003 speech, “Slavery and the Prison Industrial Complex.”