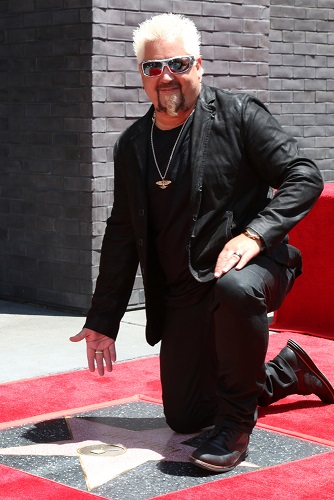 Above photo: Food Network star Guy Fieri poses in front of the star he received on the Hollywood Walk of Fame in May 2019. Credit: Shutterstock

Before my time here at The SUN, many moons ago, I had the chance to chat with Food Network’s Guy Fieri in Atlantic City. I am a huge fan of his show Diners, Drive-Ins and Dives.

And, of course, a huge fan of Guy himself.

Guy has a larger than life personality, yet he is very down to earth.  The New York Times best-selling author (16 books to date) and Emmy Award winner went from being a restaurant owner to his own show on the Food Network.

He also was honored with a star on the Hollywood Walk of Fame last month.

Back in 2006, Guy won the second season of “Food Network Star” and was awarded a six-episode commitment for his own show, “Guy’s Big Bite.”
His popularity kept growing. The rest is history as they say.

“When the Food Network explained the show [Diners, Drive-Ins and Dives] and how it works, I was like look: ‘I’m the dude–standing behind the dude–the person who just got a scratch off at the convenience store and won,’ said Fieri.

“It’s just amazing to me to be around Diners, Drive-Ins and Dives and hear the success stories,” said Fieri.

“That’s the feeling that I get, that genuine appreciation to see someone else do well.”

“I’m a little on the wilder side, but I’m just an everyday guy.”

Here is more of what the food icon had to say during our chat back then about everything from how he eats, why non-foodies love him and what influences his fashion choices.

MP: Being that you eat everywhere, do you watch what you eat?
GF: I monitor where I eat, what I eat and how much I eat everyday. I mean, I have to. I don’t think any of us can not do that. Even even if we are the healthiest person, I think we still monitor what we eat. I try to count my vegetables and my fruits.  I’m not a big breakfast fan.  To wake up and eat hashbrowns, toast, eggs, fruit cups–if I ate that much I’d have to go right back to bed. I just can’t do that.  Different people have different metabolisms and different styles. I try to be very aware of what’s in my [food] portfolio everyday.

MP: Why do you think you have such an appeal among non-foodies? I mean people who can’t even boil water are like, “Oh my God, Guy is coming to town!
GF: If I am dreamin’ don’t pinch me. I’m pretty blown away by it.  I mean I love it, because I love people.

MP: Do you have a stylist?  Are you the pretty boy in the morning? Do you make sure your colors are coordinated? (Guy starts cracking up laughing).  GF: It came very close this morning…I could have had one side of my hair like this (he jokingly uses his hand to flatten one side of his spiked blonde hair)….. No, there’s no stylist. There’s no method to the madness. I’ve been acting like this forever.  When I got on the Food Network’s The Next Food Network Star, my business partner looked at me and says “finally, your putting some legitimacy to this rock star thing!”…. I just gotta go to the beat of my own drum.

In addition to Diners, Drive-Ins and Dives, Fieri also hosts Food Network’s Grocery Games, where he sends four talented chefs running through the aisles in a high stakes, high skills, grocery store cooking competition.
As with most Food Network stars, Fieri continues to expand his brand. He also owns Hunt & Ryde Winery which he opened six years ago, named after his sons located in Northern California, Sonoma County.

Fieri’s popularity has not waned since debuting on the Food Network. I’m sure he’ll continue to be on our television screens for many more years to come.

A chat with Brandi Maxiell of “Basketball Wives LA”