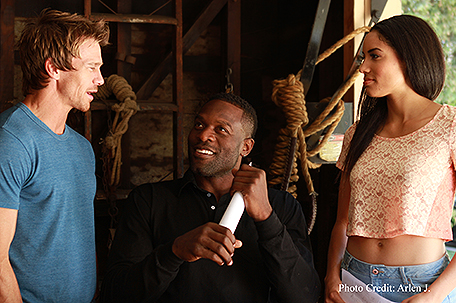 ABOVE PHOTO:  Simeon Rice with two of his actors on the set of Unsullied.

As a defensive end with the Tampa Bay Buccaneers, Simeon Rice was a Super Bowl champion. He was also a four-time All-Pro and will most likely be a future NFL Hall of Famer.

Born on February 24, 1974, Rice grew up in Roseland, Illinois, a small community on the South Side of Chicago. There, he attended Washington Elementary school, which is where he first discovered his talent for drawing.

Although Rice loved art, football led him away from his growing fascination. So, he entered high school with his heart set on playing college football and decided to forgo his artistic background for a while.

He received a football scholarship from the University of Illinois where he would become the Big Ten Freshman of the Year and a three-time All-American.

After retiring from football, he enrolled at the New York Film Academy where he finished the short film, When I Was King.

Shortly thereafter, he co-founded Dreamline Pictures with writer/producer John Nodilo and sold his first show to HBO. Next, he turned his attention to making his directorial debut, Unsullied, an homage to the actions films that he loved watching as a child.

Kam Williams: Hi Simeon, thanks for the interview. Congrats on your All-Star and Super Bowl career, and thanks for all the years of great entertainment.

Simeon Rice: Thank you, Kam, for recognizing my body as it relates to me as a football player. Now, I will surely entertain you with my non-stop action hit Unsullied, debuting August 28.

KW: And congrats on having the ambition to embark on a second career, instead of retiring to rest on your laurels. What interested you in attending the New York Film Academy? Had you studied scriptwriting or filmmaking at the University of Illinois?

SR: What interested me in attending the New York Film Academy was the ability to be a storyteller and creator. No, I didn’t study any level of film or entertainment in undergrad.

KW: What inspired you to adapt Reagan Farrow’s harrowing tale of survival to the screen?

SR: Unsullied isn’t an adaption. It is an original piece in which all the events are completely created to build the story.

KW: How would you summarize the film in 25 words or less?

SR: Unsullied is about Reagan Farrow. On a way to a race, she is kidnapped by two psychos and thrust into a dangerous game of kill or be killed.

SR: I don’t have one favorite. However, some of my favorites are Quentin Tarantino, Martin Scorese, Alfred Hitchcock and Antoine Fuqua.

SR: If I cook, I like to make lasagna.

SR: When I look in the mirror, I see a juggernaut.

SR: My parents loved me unconditionally growing up. I still live by their lessons: never half-do anything and keep God first.

SR: My earliest childhood memory is when I choked on catfish bones and my father turned me upside-down, reached in my mouth and pulled the bones out of my throat. Yup, that was disgusting!

SR: Working in the Museum of Science and Industry.

SR: I wish my mom was alive and healthy.

SR: I believe all successful people have a determined mind.

SR: Believe that anything is possible, find your passion, and then follow your dreams.

SR: I want to be remembered as a man of his word.

KW: Thanks again for the time, Simeon, and best of luck with Unsullied.

SR: Thanks for the love, Kam, and remind your readers that Unsullied opens in theaters on August 28th.