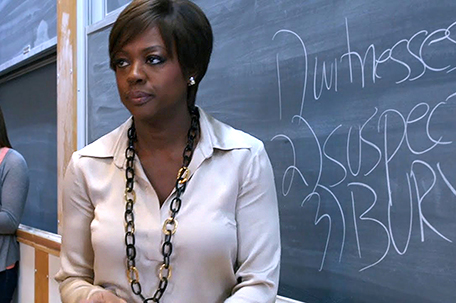 Shonda Rhimes proves to be indestructible, constantly churning out small screen hits as Thursdays become dedicated to appropriately named ‘Shondaland’ from 8PM to 11PM.  The historic woman of the hour is shattering glass ceilings one sexy, multidimensional, and dynamic character at a time.  The scintillating new crime series “How to Get Away with Murder” is proving to be as satisfying in primetime as its seasoned predecessors “Grey’s Anatomy” and “Scandal.”

The series unfolds through criminal defense lawyer Annalise Keating (Viola Davis), who whether in the courtroom or classroom has a bloodthirsty, take-no-prisoners approach.  Her students quickly learn that they can’t get over on her.  She finds five ambitious and deceptive students to act as interns in her law firm.  There’s know-it-all Michaela Pratt (Aja Naomi King), loudmouth Asher Millstone (Matt McGorry; Orange is the New Black), quiet girl Laurel Castillo (Karla Souza), sex addict Connor Walsh (Jack Falahee), and the naïve Wes Gibbons (Alfred Enoch; Harry Potter–who grew up quite nicely if I may add).  The students work together in more ways than one to cover criminal acts, using a different student’s perception each episode.  Each of their individual story lines proves to be just as interesting as the rest of the show, building to the overarching themes of betrayal and murder in the main premise.

No stranger to controversy, Annalise Keating is a powerful figure whom does her best to keep up a poker face even as her life experiences some unexpected turbulence.  Her students are quick to think on their feet, competing to get the esteemed trophy of ‘best in show’.

Of course, it wouldn’t be Shonda without the drama and twists.  Throughout episode one, we find ourselves pondering the next move.  One minute Shonda has Wes barge in on a smoldering scene with Anna and stallion Nate Lahey (Billy Brown), and the next, we see Anna kissing alabaster lips, those of husband Sam Keating (Tom Verica).  This show makes it clear that everyone has a few filthy secrets.

Aside from the madness that ensues, Philadelphia adds a beautiful backdrop to the details of the city. I can’t forget the styling in the show; the dresses and accessories this law professional dons makes me wanna commit a crime; effortless elegance!  The writing is a bit snappier with this show, but the classic fast-talking monologues and quips remind us that it’s still Shonda.

“How to Get Away with Murder” became an instant hit and is sure to keep viewers interested.  To keep abreast of the next criminal Keating and crew rescue from the law, be sure to tune in on Thursdays at 10 PM on ABC.