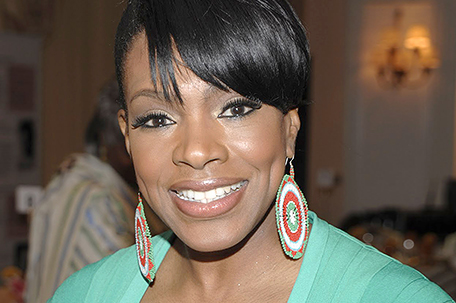 Sheryl Lee Ralph has been a staple in the entertainment industry for decades.

She earned a Tony award nomination for Best Actress for her role as Deena Jones in “Dreamgirls.”  She voiced the character Rita in Disney’s “Oliver and Company” and went on to become one of our favorites on-screen mothers as Florence Watson in “Sister Act 2: Back in the Habit”.

Ralph has seamlessly shifted from Broadway to film, to television, and to authorship with an ease and grace that is undeniable. Now she returns to television in the new CBS’ sitcom “Fam”. Created by Corrine Kingsbury and executive produced by Aaron Kaplan, “Fam” stars Nina Dobrev (Clem), Tone Bell (Nick), Odessa Adlon (Shannon), Brian Stokes Mitchell (Walt) and Ralph as Rose. Ralph sat down with the SUN to talk about her longevity in the business, her role in “Fam” and what we can expect to see from her next.

Ralph has remained a staple in an industry that is constantly shifting and credits a great deal of her success to the mentorship she received early on in her career.

“I had a mentor Virginia Capers. Virginia Capers was an incredible woman,” Ralph said. “She won a Tony in the musical “Raisin”. As a young artist, she took some time to pour into me. One day we were sitting in her apartment looking over Lincoln Center, and she said ‘Sheryl Lee Ralph, young Black actress… you can be many things, but you can’t just be one thing! If you are just an actress in this business, you are really pigeonholing yourself. You must act, you must sing, you must dance, you must learn to speak two other languages other than your own, and it would be great if you could learn at least two songs in those languages.’ That immediately put me in the frame of mind that I was going to have to use all my skills with the hopes that something would stick to this Black girl.”

“I believe that I’m part of the last of a generation to be excluded… not because we couldn’t do it, but because the opportunity to do it was not given to us,” she added. “So, when I look at Regina King winning a Golden Globe yet again, I say that is what happens when opportunity is given to talent! Just because opportunity was held from me didn’t mean I was going to stop. I was going to develop everything I had in myself, to keep myself moving forward. I didn’t want to be one note, I wanted to be a complete, well-orchestrated piece of music.”

The versality and diligence Ralph has shown throughout her career, has not gone unnoticed. The creators of “Fam”, who knew that she would be perfect for the role of Rose, recognized her abilities.

“I’ve got to tell you, everything that I’ve done before has led me to this moment.” Ralph said. “It has led me to the moment where somebody picked up the phone to call me and say ‘You’re who we want. Are you interested in doing this?’ It does not get any better than that. That’s what you work towards. You want to be exactly what somebody wants. Aaron Kaplan, our executive producer, called and said, ‘Hey, you’re perfect– do you want to do this?’”

In addition to beaming over being hand selected by one of the most respected producers in television, Ralph spoke enthusiastically about the opportunity to work with her stellar cast.

“I get to work with an actor Brian Stokes Mitchell, who I’ve always wanted to work with,” she said. “I don’t know why it never happened before, but all things in time, and here we are together. It’s wonderful working with Nina Dobrev in her first sitcom, coming from “Degrassi” and “Vampire Diaries” and the fact that she is so open to learning this new part of acting.  Working with the talented Odessa Adlon, Tone Bell, Gary Cole…I mean it’s just a jewel of a cast, and we had the best time shooting those 13 episodes in what I know is going to become one of America’s favorite TV shows.”

Ralph was also very vocal about her delight in the diversity present in her cast, and in the content on CBS.

“I love the fact that CBS is sprinkling color on the roster,” she said. “When you look at shows like “God Friended Me”, an outstanding show, when you look at “Criminal Minds”, it’s such a well-balanced show of color and culture. When you look at “Fam”, it’s just a wonderful way to add the people that you need to know more about to your life, especially in great shows. It’s a show that you can look at and say it’s about race, but it’s not because we never mention it. That’s really important, because it makes the audience draw their own conclusions. We need that… we need the kind of comedy and the kind of TV that is going to bring us together and make us all greater.”

As a fan favorite in her roles as Dee in “Moesha” and Florence in “Sister Act 2: Back in the Habit”, Ralph is no stranger to the art of playing beloved moms. She spoke about the joy of playing Rose.

“I’ll tell you, my friend Jenifer Lewis loves to say that she is the mother of Black Hollywood. I want her to know, well, you better move over, baby, and make room for your friend, because there’s another mother in town!” Ralph said with a laugh. “I love the character Rose. Rose is so in love with her family and so in love with her son, that she is going to do anything to carry on making sure that her child is happy! I love that about the character. Rose is very analytical. She’s going to look at a situation and size it up left to right, up and down, but that’s because she’s a shrink. The character is a psychologist… her job is to get into people’s heads. I love Rose! People are going to look at this show and see themselves in these characters. They’re perfectly imperfect. They’re beautifully flawed people, who love each other through the things they understand, but especially through the things they don’t understand. It’s going to be a long journey and I’m so looking forward to taking it with our new audiences.”

Ralph shared some additional hopes for the audiences tuning in to “Fam”.

“I want audiences to be able to learn from our fun mistakes,” she said. “I want them to be able to see themselves and shine a little bit brighter. I want them to realize in every perfect situation, there are smooth sides and there are rough sides, and each one of them can be a bit precarious. I’m all about how can we embrace the rough and smooth side of our life as a family, especially when your family grows to be not exactly what you expected. Because there’s nothing expected about this family.”

In addition to starring in “Fam”, Ralph’s visual and audio podcast, “Diva Defined”, premiered on January 10.

“It started out as a general concept about inspirational conversations,” she said. “Then it honed down to 13 women with incredible stories to tell. You look at these celebrities and think you know them. Then you realize through conversations like those in “Divas Defined” that you don’t know anything about this woman. You don’t know what Loni Love has had to deal with. You don’t know the growth of a Dawn Gardner from “Queen Sugar”. Sherri Shepard, a lot of her life has been in the news, but you still don’t know… that’s just the tip of the iceberg. Who is that woman behind the iconic line thrown at her, “Bye Felicia”? Who is she and where is she now, because that’s a real woman. So, it turned out to be a wonderful concept and experience for me. We shot it in my home. It was spirit filled and we had a great time doing it.”