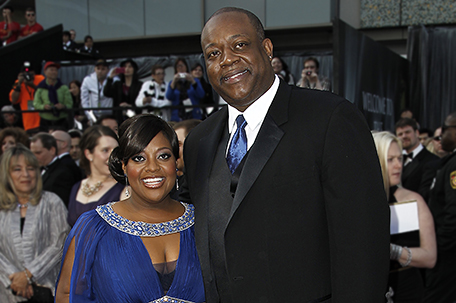 ABOVE PHOTO:   Sherri Shepherd and Lamar Sally arrive before the 84th Academy Awards in the Hollywood section of Los Angeles. Court records show Sally filed for legal separation from Shepherd in Los Angeles on May 2, 2014, citing irreconcilable differences and custody of the pair’s unborn child.  (AP Photo/Matt Sayles, file)

Talk show host Sherri Shepherd has reportedly been going through the love ringer again with an impending divorce from her current husband, Lamar Sally. Now her first husband, Jeffrey Tarpley, is reportedly referring to her as a negligent mom and is also trying to obtain full custody of their special needs son.

Last month, Tarpley filed an emergency request with the courts to modify the custody arrangements he has with Shepherd, according to TMZ.

Shepherd and Tarpley divorced in 2009 after she learned of his alleged affair back in 2006. Shepherd claims she found pictures of Tarpley having sex with someone else while their newborn son, who was born prematurely, was in a neonatal ICU for months. Tarpley allegedly later impregnated the same woman with whom he had an affair during the couple’s eight-year marriage.

According to Tarpley, Shepherd’s intense work schedule has left her little time to tend to their 8-year-old son, who has extensive developmental delay. Tarpley lives in California, while Shepherd and their son live in New Jersey. Shepherd, who is also an author, actress, comedienne, in addition to having a heavy calendar of speaking engagements, oftentimes leaves her boy with “unskilled nannies,” Tarpley alleges. He also claims his son is suffering from low self-esteem and uses velcro sneakers because he has not acquired the skill of tying his shoes. Tarpley insists Shepherd has been derelict in getting the boy the qualified help he needs.

Since Tarpley lives so far away, he feels he is powerless but desperately wants to help his child. When the dad does visit his son, his time is so limited he feels he cannot possibly offer his namesake all that he needs, which is why he is reportedly seeking full custody of the boy.

Shepherd has reportedly filed her own court papers in response to her ex’s claims, referring to him as an absentee dad. Meanwhile, a judge has denied Tarpley’s emergency request, but a hearing is set to take place in August.

Meanwhile, Shepherd’s two-year marriage to Sally has reportedly crumbled. News leaked out that the pair were expecting a surrogate to have their child July 28. Now, Sally has allegedly filed for separation and is asking for custody of their unborn son, requesting that Shepherd only get visitation.

TMZ also reports that the soon-to-be ex also wants spousal support and will battle the prenup he signed before he and Shepherd tied the knot. Sally claims that the prenup is a fraudulent piece of paper and wants it invalidated.

Sherri Shepherd is selling her house in New Jersey