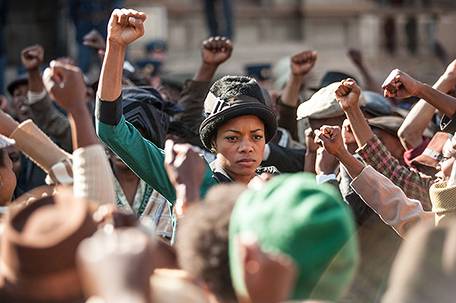 ABOVE PHOTO: Naomie Harris as Winnie Mandela in Mandela: Long Walk to Freedom.

To witness Naomie Harris become Winnie Mandela in Justin Chadwick’s upcoming film adaptation, Mandela: Long to Freedom, is to witness true cinematic transformation. So, when Harris told me that she didn’t know much about Winnie Mandela before the role was offered to her, I was intrigued.

We sat down for a quick interview, discussing her research for the role, her development of the character, and her meeting with the real Winnie Mandela.

Shadow & Act: So, there’s been a lot of movies and portrayals of Winnie Mandela in the past, but what did you want to bring that was distinct or different?

Naomie Harris: I have to tell the truth, which is that I didn’t know who Winnie Mandela was when I got the part. I agreed to play the role because I’d worked with Justin Chadwick on another movie called The First Grader and we were promoting it in Toronto and they said would you like to join this movie and I said yeah, great because I thought I knew who Nelson Mandela was and I thought, how amazing to have a story about this man’s life. I thought Winnie Mandela was a woman who stood by his side and supported him, that’s it. That’s what I thought it was.

So, for me, it was a huge shock. And I didn’t watch any of the other portrayals of Winnie Mandela because I don’t generally do that, you know? So, it was a huge shock when I started my research and discovered how controversial she is, when I discovered how integral she was to the Free Nelson Mandela movement and when I discovered she was a political activist in her own right, she led a movement, and particularly the youth uprising in Soweto- I didn’t know any of that and so for me it was such an education and with all of that knowledge, I just felt this huge responsibility to portray her faithfully and to portray her journey as faithfully as I could.

It’s not my job to defend Winnie because that’s not my job as an actor thankfully and only she can do that herself, but I did want to give her a fair representation and I don’t think that’s what she’s had up to now. I think that’s what’s beautiful about the film, that you really see her journey and you understand why ultimately she became- whether you agree with her or not- you understand how she became the woman she finally became.

S&A: I think that definitely comes through, and we see the beginning and the foundation for her anger and passion. And that’s what I wondered about- your work in developing that rising anger in her because from the beginning there was this really loving relationship between her and Nelson Mandela, but you see the foundation of the anger even then. Can you talk about that?

NH: For me, that was one of the most challenging things about playing this role because I am very British so we don’t like confrontation and I always try not to get angry at anyone, and Winnie is angry. Winnie has not just anger but a rage, a seething rage and seething frustration as well that is carried with her through out the latter part of the movie.

To tap into that and find that was a challenge but I had an amazing accent coach who was brilliant and she would come to my hotel room every day and would help me for one to two hours with the accent and she would tell me what it was like living during Apartheid, and she was like, “You can’t find the rage but how would you feel if every time you got on a bus or a tube or a train, or whatever, people said, Hey, you can’t sit here upfront in the nice seats. You have to go down to the back with the broken seats, or you have to stand.”

It’s humiliating and it builds up this sense of rage in you, or you can’t have that education just simply by the color of your skin, you have to have a lesser education. You can’t shop here. You can’t go to those toilets. You have to go around back to the disgusting toilets. All of these little indignities that eat away at your sense of pride in who you are, that’s what Winnie had to live with on a daily basis, that’s what black South Africans had to live with on a daily basis and if you really think about that, it’s enough for you to get angry and that’s how I tapped into it.

S&A: Definitely, that scene where she’s screaming “Where are my children?!” was so powerful and there was a great range in the character. Have you met Winnie Mandela and what was that like?

NH: I met her several times now but I first met her because Idris (Elba) organized a dinner for us before we started filming and he said, let’s go and sit down with Winnie and I was terrified because I felt I hadn’t done all my research and thought she’s such a formidable character and will she be happy with me playing her role?

And it was so great because she was really generous and the most important thing for me to ask was how do you want to be portrayed? She said, “You’ve done your research, you are the right person for this role, all I ask is that you portray me honestly,” and that was so liberating because I’d felt I was in tight jacket because everybody had such strong opinions about who she was and I suddenly felt really free to own the part and make her into what I wanted her to be.

I met her again at the premiere in South Africa and she cried and she said, “That’s exactly how it was and you managed to capture my essence up on screen,” and she said, you’re an honoree African, that for me was huge. That was the critic I was most worried about and if she’s happy, then I am happy.

S&A: What are your hopes for the film, and what impact it might have or what conversations it might bring up?

NH: For me, it’s important that this film does well and impacts as many people as possible because to paraphrase Winnie, this is what she said at the premiere which I think is so beautiful, is what we forget is that freedom and racial equality, which we don’t have 100 percent but at least we’re in a great position at the moment, a better position than we were, that it is hard won and people lost their lives to ensure that we have the freedom and let’s never forget that and this film is one of the ways that we remember that, and that we learn to value our freedom and not to abuse it. Everybody needs to learn that lesson.