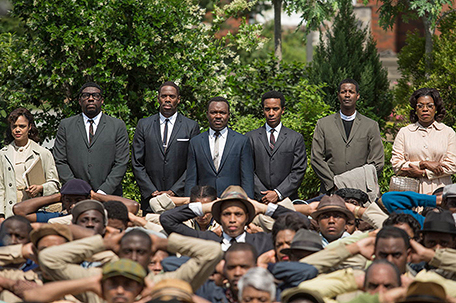 UPDATE from the filmmaker, Ava DuVernay, who shared the following on Twitter, when asked about “Selma’s” SAG shut-out (or at least, what appeared to be a shut-out): “Film not done in time for nominating screeners. All good.”

Surprises? I really expected David Oyelowo would make the cut, especially after all the praise his performance as MLK in Selma has received from critics, fans and peers, since the film debuted at the AFI Fest a month ago. I felt, of all the performances in the film, he had the strongest chance. Although I loved Carmen Ejogo as Coretta Scott King. She’s moving and convincing in just about every scene she’s in, but it could just be that her role isn’t meaty enough. I haven’t seen all the other performances in contention, so I can’t entirely compare.

Still, quite a surprise that Oyelowo was left out.

Looking over the list of nominees, as you’d probably expect, there isn’t much of what we’d call diversity represented. Of note, in terms of individual recognition, in consideration of this blog’s interests:

– Cicely Tyson picked up a nomination for her performance in the Lifetime movie, “The Trip to Bountiful,” which was adapted from the play – Outstanding Performance by a Female Actor in a Television Movie or Miniseries

– Uzo Aduba picked up a nomination for Outstanding Performance by a Female Actor in a Comedy Series, for “Orange Is the New Black”

There are black actors who are part of ensemble casts that are nominated in ensemble categories – “Brooklyn Nine-Nine,” “Orange Is the Black,” “House of Cards,” and others. But the above are the only nominees in individual categories.

I should note that the SAG Awards are typically an early look at the actors who will likely contend for the Oscars in their individual categories.