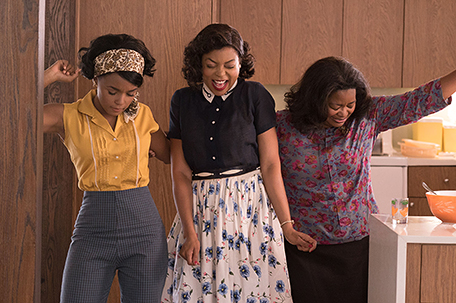 ABOVE PHOTO:  The cast of Hidden Figures.

There have been so many times when Black women have been counted out of the race — especially the human race.

It was no different in the 1960s, a time when Civil Rights were more important than a woman’s role in the workforce. Even more rare, a Black woman taking a position in the science, technology, engineering or mathematical fields as they were (and still are) controlled predominantly by White men.  Three women stared stereotypes in the face and shattered innovation to become historical figures in both NASA and American history.  Their stories are being told for the first time on a national scale in the recent motion picture, Hidden Figures.

Katherine G. Johnson (Taraji P. Henson), Dorothy Vaughan (Octavia Spencer), and Mary Jackson (Janelle Monáe) are the unseen faces of NASA. These women who defied the odds, put their brain power to extensive use and helped the country excel in the great “space race” against Russia.  Practicing scientists in Langley, Virginia — not exempt from racial tensions and segregation — these women had to perform their jobs better than their White counterparts, as everyone expected them to fail.  Katherine Johnson was treated in such a manner, and was often excluded from recognition.  Ultimately, she found the equation that got John Glenn (Glen Powell) into space despite these personal obstacles.

Dorothy Vaughan ran the segregated “colored” computer section of NASA headquarters.  Smart as a whip and fiery, she demanded respect and kept her subordinates in line to complete the task at hand.  She fought through the racism, red tape and administration backlash to receive the credit she was due.

Mary Jackson was the most colorful of the women, as her blunt and comedic verbiage either got her in trouble, or kept her out of it.  Tapped to become the first Black aeronautic engineer, she had to fight the court system to be able to attend the necessary classes for her degree.  Trying to maintain her sanity in the face of her oppressors, she kept her nose to the grindstone and handled business.

These remarkable women are worthy of a motion picture. As this film showed us, Black women could be (and can be) smart, nerdy, classy, and fierce in their battle against discrimination and doubt, all while managing motherhood and marriage.

Kevin Costner, Kirsten Dunst, and Jim Parsons gave decent performances as NASA scientists and White superiors, showing progression throughout the film.  The soundtrack was written and performed by the movie’s  producer, Pharell Williams, and it embodies the era, as there are references to Curtis Mayfield and Smokey Robinson in the original songs.  The costumes progressed the film as well, as we see the trio’s color themes change from dark, subdued colors to brighter, bolder patterns.  This gradual change fits their dispositions as well, as these women blossomed more as the story unfolded.

I believe this is an inspiring story that all young women should be made aware of, whether they choose to pursue S.T.E.M. fields or not. Hidden Figures was made with an estimated budget of $25 million and has grossed $25,754,235 since its January 6 premiere nationwide (the film debuted Christmas day in select theaters).