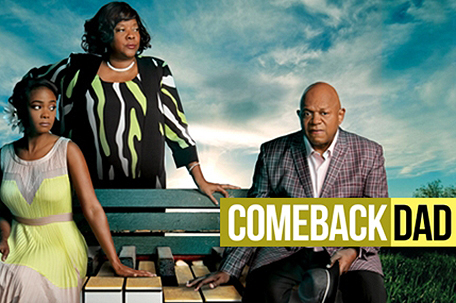 I raced to Kinko’s like a woman who’d mistakenly left her purse there. In my sweaty right hand, I held my heavy script that I’d spent three months revamping – a family tale of redemption called Comeback Dad (premieres Saturday, June 12th at 8 PM ET / 7 PT) . There was only one day left in the UP’s Faith and Family Screenplay Competition deadline and I was epically late in mailing it off. The cost was 80 bucks, so I prayed, swiped my card and hoped for the best. Three months later, Tracey called and changed my life.

This is what is what we call your “big break.”

It wasn’t overnight, as I’d been tirelessly writing and tweaking my films and sitcoms while working tons of other jobs, but it was definitely kismet. I ventured to Miami for the American Black Film Festival (ABFF). UPtv has a number of events for the three finalists, one of which is a ridiculously scary and intimidating live table read. It’s live. Like live, live. Meaning that hundreds of people watch you and a specially chosen cast read your script. I was the only one who penned a comedy, so my success hinged on how many laughs I received. I believe there were about eight, which was actually pretty good. I left Miami sans a win but with an incredible tan, new friends and a script option from the network. This is when a network or production company secures the “option” to make your film within a certain amount of time. Having had some experience, I know that an option is not a guarantee and most times, your film never makes it to the screen. I decided to not wait with bated breath for anything spectacular.

Then something spectacular happened. Barbara, the senior vice president of programming at UPtv, changed my life. Note: UPtv really is in the business of changing lives. See: my life.

A week before Christmas, I was called in for a meeting to discuss the potential of actually making Comeback Dad. I was ready. I’d watched every episode of Entourage. I came to the meeting with a writer’s resume, a list of other potential projects for the network and a one sheeter about Comeback Dad. My one tip to writers would be to truly maximize the time you have in front of programming execs. It’s priceless. Be memorable. Be organized. Be star worthy. Though I was ready for a tough meeting where I’d have to prove myself, Barbara was surprisingly warm and encouraging. “I thought you were gonna come in here with some ideas scribbled on a napkin,” she mused, as I slid over a neat folder. “Kim, we’re about 89 percent sure we’re going to make this movie.” I wasn’t convinced. Seriously, who skips all of the murky steps to getting your film made and have a programming exec swoon over something you wrote in a flooded apartment while your cat ran back and forth like a loon. This girl, apparently.

After months of rewrites (20, to be exact), we filmed in May, and wrapped just three days before my birthday. This was my first time being on set for a film that I wrote. The cast, which includes the amazing Charles S. Dutton, Loretta Devine and Tatyana Ali, assumed that I was the hair and makeup girl due to the fact that I usually do dress like a top stylist at a trendy Paul Mitchell salon. They’re so chic! Sitting at the video village with director Russ Parr was magical. There is nothing like seeing your words come to life. Especially the heart-breaking scenes that personally forced me to conquer my demons. The actors conquered theirs as well. It was exhilarating and I will cherish those three weeks for the rest of my life.

The day is upon us. The premiere.

I ventured back to the American Black Film Festival in New York City for the world premiere of my first film…in the most critical city in the nation…at a highly regarded film festival. No reason to be terrified, right? I sat next to Tatyana who proclaimed just five minutes before the lights dimmed, “I’m gonna throw up.” I replied with a comforting, “Well I think I’m gonna die, so this is gonna be great!” Charles Dutton and Brad James cut the tension with some much-needed jokes. And then…showtime. We cried. We laughed. We survived the screening. Many women approached me after the film and thanked me for creating a film that spoke to so many of their personal issues. Screenwriting can be such a selfish act. It’s a cathartic process for most of us. We have to. So, it’s an incredible thing to lay your soul down on the page and have pieces of it resonate with absolute strangers.

The film spurned countless conversations about the role of fathers in their daughters lives. I was floored. I wrote Comeback Dad with the intention of humanizing absentee fathers to help evoke a spirit of forgiveness within this broken relationship. I felt as if Dutton’s character, Othell, who is named after my real father, needed to have his story told to encourage estranged fathers to fight for their daughters. I think I may have done just that. And there’s no better reward for a filmmaker than to have their film help someone become whole.

Kim Wayans shares her struggle to transition from comedy to drama