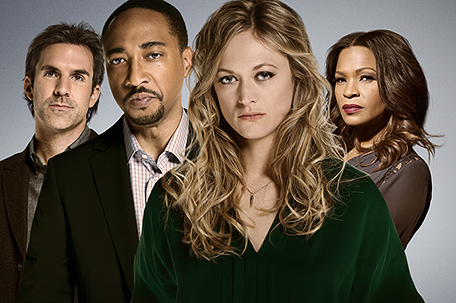 ABOVE PHOTO:  The cast of The Divide from left Paul Scheider, Damon Gupton, Marin Ireland and Nia Long.

NEW YORK– Tony Goldwyn has displayed a lack of ethics in the White House.

As President Fitzgerald Grant on ABC’s hit melodrama “Scandal,” he has cheated on his wife right under her nose and even smothered a pesky Supreme Court justice on her sickbed.

But in his behind-the-camera roles as producer, director and writer, Goldwyn is exposing the ethical minefields of the justice system in a fine new drama “The Divide.”

This eight-episode series, which premieres on WE tv on Wednesday (9 p.m. EDT), teams Goldwyn with fellow creator and producer Richard LaGravenese (writer of last year’s HBO film “Behind the Candelabra”), who penned the two-hour debut. 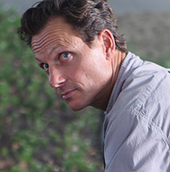 PHOTO:  Tony Goldwyn on the set of The Divide.

“The Divide” is a thought-provoking and suspenseful drama that explores the personal cost of morality, ambition, ethics, politics, and race in today’s justice system through the eyes of Christine Rosa played by Marin Ireland, an impassioned caseworker with The Innocence Initiative, and Adam Page played by Damon Gupton, an equally passionate district attorney and political rising star.  Eleven years ago, the Butler family was attacked in their Philadelphia home and all but the youngest daughter were brutally murdered. The senseless deaths of this affluent African American family, seemingly at the hands of two white construction workers, Terry Kucik (Joe Anderson) and Jared Bankowski (Chris Bauer), threatened to ignite a racial firestorm in the City of Brotherly Love. Adam Page (Damon Gupton), himself an affluent black man and the city’s District Attorney as well as a political rising star, made a name for himself by securing convictions for both men, leading to the death penalty ruling for Bankowski. Now, Christine Rosa, a caseworker with the Innocence Initiative, believes Bankowski was wrongly convicted of the heinous murders and struggles to stop his impending execution, while tirelessly working to exonerate Kucik.In her search for the truth, Christine uncovers evidence that puts her at odds with Adam who will do everything in his power to uphold the verdict and keep his reputation intact. His actions put a strain on his marriage to Billie, played by Nia Long, a powerhouse corporate attorney at a crossroads in her personal and professional life. Throughout the journey, all three of their pasts resurface as they are faced with the question of one man’s guilt or innocence intertwined with their own personal histories. As Christine and her boss (Paul Schneider) begin probe inconsistencies with the verdict, Adam starts to acknowledge problems with the verdict, which vaulted him to prominence a dozen years ago and could lead to his undoing if it came apart now.

“In the past,” Goldwyn says, “I had assumed that if someone’s in prison, they probably did it. I didn’t realize how much gray area there is in our justice system, and how many cracks catch people without money and influence.”

“On the show, we try to come to terms with the ambiguity of human nature,” adds LaGravenese. “In the Writers Room, I said, `Let’s get rid of words like “good” and “bad.” That’s not what our show is about.”

The two first worked together when LaGravenese did a script rewrite for the Goldwyn-directed 2010 film “Conviction,” which starred Hilary Swank in a dramatization of an actual Innocence Project case.

When that was done, says Goldwyn, “I wanted to explore the Innocence Project further. I thought a TV series would be a great way.”

After months of hashing out ideas, then crafting a proposal for the series they conceived, they landed a deal with the corporate parent of AMC to film a pilot. Time passed. Then so did AMC on the series. But a sister network, WE tv, stepped up.

WE tv, in the midst of a network-wide rebranding, claimed “The Divide” as its first-ever scripted series – a hoped-for repeat of how, in 2007, a new drama called “Mad Men” heralded the revamping of AMC.

Goldwyn and LaGravenese went back to work to beef up the narrative in preparation for adding and reshooting scenes for the pilot.

Goldwyn had landed the original deal for “The Divide” before committing to “Scandal,” but despite those “presidential” duties (which he resumes for season four later this month), he says the show was generous in giving him freedom to develop “The Divide.” And when “Scandal” took a two-month hiatus in the middle of last season, Goldwyn was able to head to Toronto, where he directed the first two episodes of “The Divide” as it sprang to life again.

Shadow and Act contributed to this article.

Legal thriller ‘The Divide’ canceled after one season