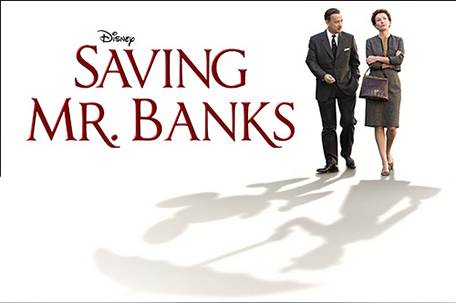 P.L. Travers (Emma Thompson) was the pen name of Helen Lyndon Goff (1899-1996), the creator of the children’s classic “Mary Poppins.” When his daughters were young, Walt Disney (Tom Hanks) promised to turn their favorite book into a movie, since they were so enchanted by the British nanny with magical powers.

Little did he know that the effort to secure the film rights would drag on for a couple of decades due to the uncompromising author’s inflexibility, as she insisted that any adaptation remain faithful to the source material. The protracted courting process finally proved fruitful in 1961, when Walt wined and dined the reluctant writer at his Hollywood studio while making an elaborate sales pitch to turn the story into a musical.

He would succeed in wooing Travers with the assistance of his screenwriter (Bradley Whitford) and songwriting team (B.J. Novak and Jason Schwartzman), although the deferential chauffeur (Paul Giamatti) assigned to drive her around during her stay would also play a pivotal role.

That productive two-week visit is revisited by Saving Mr. Banks, a dramatization directed by John Lee Hancock (The Blind Side). The picture’s title is a reference to Mary Poppins’ employer George Banks, who was among the many characters Travers was trying to protect.

Credit consummate thespians Tom Hanks and Emma Thompson for approaching their lead roles in such convincing fashion that a period piece about a contract negotiation actually proves entertaining. Hanks pours on the folksy charm impersonating the legendary Disney opposite the chameleon-like Thompson who takes her sweet time as the steely Travers to soften from skeptical to enthusiastic about the proposed project.

While Saving Mr. Banks certainly waxes sentimental and ends on an upbeat note, a Mary Poppins sequel was not to be, despite the fact that the original won five Academy Awards. Travers and Disney had such a big falling out prior to the picture’s release that she wasn’t even invited to the premiere.

Furthermore, she remained so enraged about her book’s mistreatment at the hands of the studio that she went to her grave refusing to entertain overtures for another adaptation, even reaffirming that preference in her will. However, the truth never seems to get in the way of a syrupy cinematic send-up with a stock, “happily ever after” ending.

To paraphrase Mary Poppins, “Just a spoonful of sugar helps revisionist history go down,” and in a most delightful way!

To see a trailer for Saving Mr. Banks, visit:  http://www.youtube.com/watch?v=nijccxWvyXU