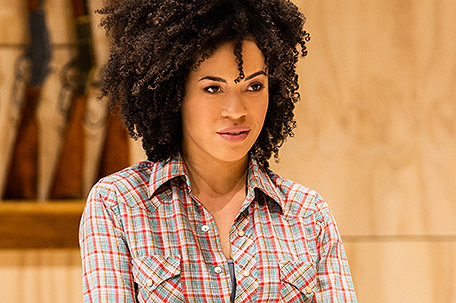 ABOVE PHOTO: Sasha Hutchings as Laurey Williams in “Oklahoma!”

The classic “Oklahoma!” was the first musical written by the iconic duo of Richard Rodgers and Oscar Hammerstein II. Based on the play, “Green Grow the Lilacs” by Lynn Riggs, “Oklahoma!” tells the story of Laurey Williams, a farm girl and the rivalry between her two suitors. The Tony Award-winning production, which first opened on Broadway in 1943, has been wowing audiences from the beginning.

A revival of “Oklahoma!” is back and better than ever as the first show to open the Forrest Theatre since the COVID-19 shutdown. The triple threat dancer, actress and singer Sasha Hutchings leads the cast as Laurey Williams in this national tour.

Hutchings spoke to The SUN about her love for performing, the importance of gratitude and the significance of being a Black woman playing the role.

The first performance Hutchings remembers giving happened when she was just three years old and instantly sparked her passion for the stage.

“It was such a vivid memory, and I don’t have that many memories of being 3-years-old,” Hutchings said. “I loved that rush and feeling like I was connected. I was immediately getting a response from the audience and trying to give something back. I think that was definitely just realizing I like being on stage. That was my first time falling in love with theater.”

Hutchings’ passion for performance was further solidified with a focus on dance specifically.

“I knew I never wanted to not be dancing, so no matter where we moved, where I was in school or what was going on, I always found a way to fit in my dance training,” she said. “I knew I wanted to dance, and I didn’t want to do it halfway. I knew I wanted that to be my major and I wanted to really go for it 100%.”

Hutchings left her hometown Macon, Georgia to further her studies, integrating acting and singing into her training at Oklahoma City University. After graduation, she made the big move to New York, where her Broadway career began to flourish. She made her Broadway debut with “Memphis” as a swing, which also served as the first time she truly saw herself on stage.

“Imagination is one thing. We can imagine ourselves in spaces and we have to… especially as Black people, especially as women,” Hutchings said. “You have to imagine yourself in a place that you have never been, you’ve never seen yourself, you’ve never seen anyone that even looked like you. That is a necessity of anybody that has been oppressed, shut out and marginalized. That’s real and the power of that is real.”

“There is something else that happens when you see yourself,” she continued. “It shifted something on a molecular level for me. I saw myself, but I also saw my skill set, and the style that I love, and it was like,this is it.”

Hutchings found herself immersed in the types of shows she had always dreamed of being in. She went on to become one of the original cast members in the legendary “Hamilton.”

“We would take a knee before The Battle of Yorktown started every show,” Hutchings said. “I used to use that as a moment for prayer, gratitude and reflection just to say I am literally in the middle of what I said I wanted. I’m in the middle of this moment where I’m at the height of my industry, in this show that is this center of gravity for where we are in theater and what’s possible with pushing it forward. I’m working with some of the most talented people I’ve ever been around, and I’m challenged by the dancing and styles. There were so many things that came together in that moment. I remember taking a moment to say, ‘this is what you asked for.’”

Hutchings’ talent continued to be recognized after “Hamilton.” Her journey in “Oklahoma!” initially began as a standby on Broadway. Now, she is leading the production on the national tour.

“Oklahoma!” was the next biggest challenge for me personally as an artist after “Hamilton,” Hutchings said. “I wanted to step up into principal work, I wanted to step into roles, step up as a singer and actor and I wanted a chance to show those things. I worked really hard in studying and in coaching — you have to invest in your skills. It’s moments like these when I have to sit and remind myself to say, ‘thank you for this moment, this challenge and for this fruit that I’ve been sowing seeds for, for so long.’”

Hutchings continues to embrace gratitude for her role as Laurey Williams in “Oklahoma!” She also acknowledges the parallels between her life and Laurey’s, as well as what it means to play this character as a Black woman.

“It’s been such a gift,” she said. “Sometimes you read scripts, especially older scripts and the women’s roles don’t feel as fleshed out, as whole, as round or as full as you want them to be. I have to say, Laurey is a powerful character. They really did put two women, Laurey and Aunt Eller at the center of the story in a way that not a lot of stories do.

“What I like about this show is that everyone is asking very challenging and forceful questions about how to be, and who has a right to live and a right to want things, “Hutchings continued. “I connect with that a lot as a woman and as a Black woman. Even now, I want things and I’m asking for them and some other people in my community seem to have opinions about what I can and can’t expect, ask for, desire, demand, and take. Challenging those things is pretty timeless.”

In addition to seeing Hutchings and her talent making waves in the theater, audiences can also see her as Hope in Starz “Run The World,” which is currently in production for its second season. Be sure to follow and support Sasha Hutchings on social media @SashaHutchings.

“Oklahoma!” will be at the Forrest Theatre from March 8-20. Visit: www.kimmelculturalcampus.org for more details on tickets and showtimes.