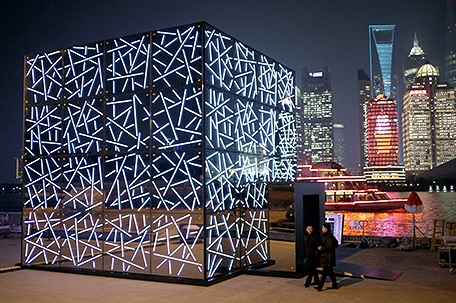 ABOVE PHOTO: A Reflection of Progress: The LOOK pavilion is comprised of numerous mirrors inlaid with LEDs and is a tribute to Saint-Gobain’s tradition of glassmaking. By day, its exterior reflects the dynamic world around it; by night, it becomes a perpetually shifting cube of light.

“Future Sensations,” a never-before-seen experiential journey of science, storytelling and art, makes its only U.S. tour stop at The Oval on Philadelphia’s Historic Benjamin Franklin Parkway

Valley Forge, Pa– Saint-Gobain, one of the world’s largest building materials companies, commemorates its 350th anniversary with a never-before-seen global exhibition of epic proportions, “Future Sensations.” Free to visit, “Future Sensations” is an immersive experience with five distinct ephemeral pavilions that take visitors on a sensory journey of science, storytelling and art that celebrates the past three and a half centuries and offers glimpses into future innovations that will transform the world. The touring exhibition makes four stops across the globe, including Shanghai, China; São Paulo, Brazil; Paris, France; and Philadelphia – the only tour stop in North America and home of Saint-Gobain’s domestic headquarters. “Future Sensations” exhibits May 30 – June 6, 2015, at The Oval, located on the northwest end of Philadelphia’s Benjamin Franklin Parkway.

“Philadelphia is honored to serve as the flagship city in North America to help Saint-Gobain commemorate its historic milestone and the 15 generations of innovators responsible for the anniversary,” said Mayor Michael A. Nutter. “There is no mistaking the architectural influence Paris has had on Philadelphia, and now our City has the distinct privilege of hosting the “Future Sensations” exhibition on Benjamin Franklin Parkway, which was modeled on Paris’ own Avenue des Champs-Élysées. The latter is a remarkable nod to Saint-Gobain’s heritage given it was founded in 1665 to manufacture glass for the Hall of Mirrors at the Palace of Versailles.”

From the glass pyramid at the Louvre, to the Statue of Liberty and the World Trade Center, and even Philadelphia sites like Boathouse Row, the Kimmel and Comcast Centers, Saint-Gobain high-performance building materials have brought unique features to many of the world’s most iconic structures. “Future Sensations” highlights such innovations which have changed the face of the world.

“This exhibition will remind people of the strength that is acquired through 350 years of enduring, relevant innovations,” said John Crowe, President and CEO of Saint-Gobain and its North American construction materials subsidiary, CertainTeed Corporation. “Pushing boundaries and rising to the challenges of the technological world has shaped our history and given us the conviction to believe in the future. ‘Future Sensations’ takes that optimism and enthusiasm for the building blocks of tomorrow and re-imagines it in a way that is uniquely Philadelphian in its focus and attitude. ”

Each of the five pavilions weighs between 20 and 50 metric tons. They range in height from 13 to 32 feet. A total of 26 products from the Saint-Gobain family of companies are used in their construction.

Whether it is Delaware Valley-headquartered construction materials powerhouse CertainTeed, world-leader in abrasives Norton Company or the dynamic glass technology SAGE™, the full breadth of the North American portfolio will be on display in ways that will challenge and delight viewers, regardless of age or background.

Philadelphia Parks & Recreation and the Fairmount Park Conservancy are proud to announce that Saint-Gobain’s “Future Sensations” is just the first foray into a season-long celebration of outdoor fun at The Oval, with Saint-Gobain serving as one of the Premier Sponsors of the hotspot’s 2015 summer season. “Future Sensations” will be complemented by a pop-up beer garden and a variety of food trucks, providing yet another example of how The Oval’s programming continually transforms this premier location into a hip, urban oasis of themed activities and entertainment.

“An exhibition of this magnitude is a first for The Oval and will be unlike anything we’ve ever seen on the Parkway,” said Kathryn Ott Lovell, Executive Director of the Fairmount Park Conservancy. “The ‘Future Sensations’ exhibition underscores all the elements that make The Oval a must-see destination for neighbors and visitors alike: art, architecture, science, innovation – and above all, fun.”

The Future Sensations exhibition is another opportunity to advance Philadelphia’s “More Park, Less Way” action plan, which calls for an increase in urban vibrancy on the Benjamin Franklin Parkway. “In response to the action plan, we have spent the past three years working alongside the Fairmount Park Conservancy to bring unique programs to The Oval,” said Michael DiBeradinis, Deputy Mayor for Environmental and Community Resources. “Now, ‘Future Sensations’ will build upon all that great work and will set a new standard for open-space place-making in Philadelphia.”