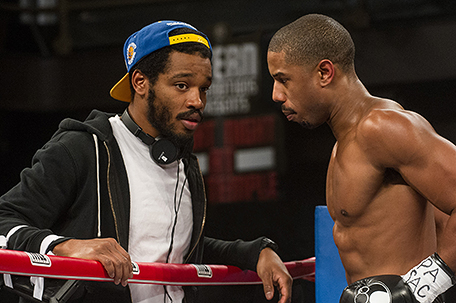 Filmmaker Ryan Coogler hails from the East Bay Area of Northern California. In 2011, his student film, Fig, which followed a young street prostitute’s fight to keep her daughter safe, won the Director’s Guild of America’s Student Filmmaker Award, as well as the HBO Short Filmmaker Award. He earned his MFA in Film and Television Production at the University of Southern California in May 2011.

Coogler’s feature length screenplay Fruitvale, based on the 2009 BART police shooting of Oscar Grant, was selected for the 2012 Sundance January Screenwriter’s Lab. In 2013, he made his directorial debut with the critically-acclaimed adaptation of the script, Fruitvale Station, which won both the Grand jury Prize and the Audience Award at the Sundance Film Festival.

Coogler still lives in the Bay Area where, in addition to making movies, he works as a counselor at Juvenile Hall in San Francisco. Here, he talks about his sophomore offering, Creed, the seventh installment in the Rocky franchise. The picture stars Michael B. Jordan, Sylvester Stallone and Tessa Thompson.

Kam Williams: Hey Ryan, thanks for the time.

KW: I loved the film!

RC: Thank you, bro. I really appreciate that.

KW: I loved how you weaved a new character-driven storyline in with the old Rocky so well. You did a masterful job.

RC: That means the world to me because we worked really, really hard on it.

KW: Michael [Creed’s star Michael B. Jordan] told me that this was a project that you already had on a back burner when you were shooting Fruitvale Station. How long had you been thinking about making this movie?

RC: I’ve been a fan of the Rocky movies for about as long as I can remember, because of my father. He was a big Rocky fan who watched the movies with his mom when she was bed ridden. So, it was kind of a tradition that got passed down to me and my brothers. That was before Mike and I even met. I came up with the concept for the script while watching my father deal with his own disease. I came up with a story that I hoped he would like about young man who has a relationship with a hero going through the same illness.

KW: How did you come up with the idea of making a Rocky movie revolving around the son of Apollo Creed?

RC: When I would watch the Rocky movies with my father, I loved Rocky, but I would also relate to Apollo instantly, every time he walked onto the screen. And I would root for him, even when he was at odds with Rocky. That’s one of the things that was so interesting about that character. How he was so beloved. I spoke to Sly who said Apollo was inspired by Muhammad Ali.

KW: How did it feel to get Sly’s blessing to make another Rocky movie?

RC: That character is very much a part of him, emotionally and creatively. so, it was a very big deal when he said, “Let’s do this!”

RC: It was amazing in every way, Kam. I learned a lot in the process, and he was so much fun to be around and to have on set. He challenged me in some ways I’d never been challenged before. Remember, he has a 40-year background in being a movie star. Not just an actor, but a star. So, he has an incredible perspective. Plus, he’s played this character for 40 years. My biggest job was to convince him that all he had to do was to show up and act, since he was also used to writing, directing, producing and choreographing. That being said, he was always available when I sought out his advice. But I would say that his performance here was very much Sly as an actor unfiltered by distractions. He was very focused. That enabled me to bring out a lot of elements of the character that were within Sly, but people hadn’t really seen before. And he was excited about that. .

KW: Yeah, when I first interviewed him, I was surprised at how intelligent, sensitive and sophisticated he was, because I was expecting to meet somebody like Rocky or Rambo.

RC: I walked into my first meeting with him the same way. You realize within a few seconds that you believed those characters as the result of world-class acting. He’s very creative, and an intellectual, and nothing like the characters he’s famous for. Once I realized that, I was just taken aback, and became really excited, the same way a sports coach would be if they had an opportunity to add someone with great talent to their team. I was salivating at the idea of working with him. He’s so convincing on set to the point that you find yourself calling him Rocky.

KW: I told my readers I’d be interviewing you. Attorney Bernadette Beekman says that you and Michael remind her of Robert De Niro and Martin Scorcese. Of the many famous actor/director duos, which do you feel you two most resemble?

RC: [Laughs] That’s a great question. It’s so hard for me to compare us to them, Spike and Denzel, more recently, Scorcese and DiCaprio, or any other pillars of the industry. you could also look at David O. Russell, who tends to work with Jennifer Lawrence, Christian Bale, Bradley Cooper and De Niro, too. I could never compare us to any of them after just our second time working together. But I do hope that I won’t feel as comfortable about the comparison 20, 30 or 40 years from now. You know what I mean? [Chuckles]

KW: After Fruitvale Station, which was a true story about the shooting of an innocent, unarmed young black man, Oscar Grant, by a police officer, the whole Black Lives Matter movement began to blossom.

RC: What Fruitvale was about had been going on for years, and it’s still happening. Technology played such a role in that movie. Folks had cell phone cameras on that train, and they just happened to take them out and capture Oscar’s murder. The thing about the Bay Area is that it’s on the leading edge of technical innovation. Now, the rest of the world has kind of caught up. Today, everybody has a camera on their phone. So, the type of violence that you used to only hear stories about, and ordinarily couldn’t be verified, is often being caught on camera. That’s why the movement is getting so much traction. But Mike and I are definitely proud to have had the opportunity to make that film.

KW: I wish cell phones existed when I was young. I was profile stopped dozens of times in my teens and early twenties.

RC: That’s heartbreaking, man. What people take for granted is the trauma that comes from being stopped when you look like us.

KW: Editor/Legist Patricia Turnier asks: What was the greatest barrier you faced in Hollywood and how did you overcome it?

RC: My own inexperience. It’s very much a business that’s risk averse. And when I became a filmmaker, I had some great ideas for feature films, but the way the industry’s set up, you have to have an agent before anybody will give you the time of day. That sets up a strange Catch-22. You basically have to make something on your own without a lot of outside help that gathers enough attention to make the studios take note. That was the biggest hurdle, although I also had to deal with being young, black and from Oakland.

KW: Thanks again for the time, Ryan, and best of luck with the film.

RC: Thanks, Kam. Really nice talking to you.

To see a trailer for Creed, visit: https://www.youtube.com/watch?v=FtWoDw3GvlA