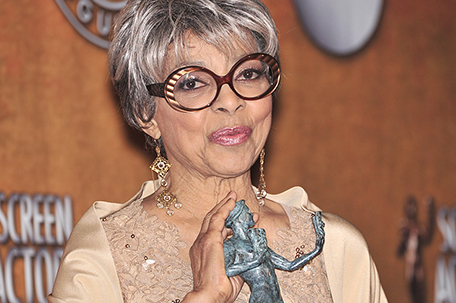 Legendary actor, author and activist Ruby Dee will be celebrated with a public memorial on Saturday, Sept. 20, at 11 AM at The Riverside Church in Harlem.

The service will feature tributes and reflections from family, friends and colleagues that were influenced by her life and work. Among those paying tribute will be Angela Bassett, S. Epatha Merkerson, Phylicia Rashad, Lynn Whitfield and Mayor David Dinkins.

Musical tributes will be given by Alicia Keys, Wynton Marsalis and Audra McDonald. Actor Harry Belafonte will deliver Dee’s eulogy. Dee, a lifelong advocate for initiatives supporting the arts and education, died June 11 at age 91.

With a career spanning several decades, Dee is best remembered for her roles in A Raisin In The Sun and American Gangster, which earned her an Oscar nomination. Along with her late husband, actor Ossie Davis, she was also a civil rights activist.

The family suggests that in lieu of flowers, donations be made to the Ruby Dee Memorial Fund at Hunter College, Delta Sigma Theta Sorority, Inc., or a local community theater.