‘Roughing’ it with Taraji 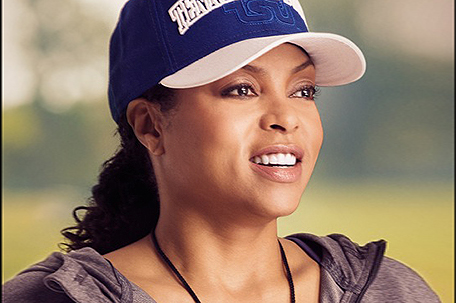 ABOVE PHOTO:  Taraji P. Henson as Catana Starks in the new inspirational biopic, “From The Rough.”

Taraji P. Henson earned an Academy Award nomination for Best Supporting Actress opposite Brad Pitt in David Fincher’s The Curious Case of Benjamin Button.  She is a 2011 Emmy-nominee for Best Actress in a Movie or Miniseries for Lifetime’s Taken From Me. Taraji also starred as Detective Joss Carter in the highly-rated CBS crime drama “Person of Interest.” She was a series regular on “Boston Legal” and enjoyed a recurring role on “Eli Stone.”

On the big screen, she starred in the number 1 box office hit Think Like a Man, as well as in its upcoming sequel, Think Like a Man, Too. And in September, she’ll be starring opposite Idris Elba in No Good Deed.

Henson’s additional credits include Larry Crowne, The Karate Kid, Date Night, I Can Do Bad All By Myself, Peep World, The Good Doctor, Something New, Not Easilty Broken, Hurricane Season, The Family That Preys, Smokin’ Aces and Once Fallen.  In addition, she received rave reviews for her work in Talk To Me and Hustle & Flow, making her singing debut performing the Academy Award-winning song “It’s Hard out Here for a Pimp” on the Oscar telecast.

Henson is well remembered for her role as Yvette opposite Tyrese in Baby Boy, and collaborated with director John Singleton a third time on Four Brothers. Plus, she was featured in Jamie Foxx’s music video “Just Like Me” and also appeared in Estelle’s “Pretty Please.”

Born and raised in Washington, DC, the Howard University graduate resides in Los Angeles with her son, Marcel. She dedicates much of her spare time to helping disabled and less fortunate children.

Here, she talks about her new film, From The Rough, an inspirational biopic where she portrays Catana Starks, the African American trailblazer who became the first female to coach an NCAA Division-1 men’s team when she accepted the reins of the golf squad at Tennessee State.

Kam Williams: Hi Taraji, thanks for the interview.

TPH: Well, first of all, I’d never seen a movie about a female coach before, outside of that Goldie Hawn comedy from years ago, Wildcats. And I had certainly never seen an African-American woman portrayed this way in a drama. That was the first thing that interested me. Then, when I read the script, I went, “Wow! What an amazing story!” She had all the odds stacked against her, yet she and her team won. And it was all because of the tenacity and belief and passion that she instilled in her players.

KW: I had never heard of Catana Starks before seeing this film. Why do you think she’s so unheralded?

TPH: Honestly, I don’t know. Maybe, because she didn’t coach at an Ivy League or big name school, but at an historically-black university. That’s another reason why I did the film. I felt the world needed to know about this woman, which is what we’re trying to do now.

KW: Editor/Legist Patricia Turnier asks: Are you an athletic person?  In other words, what are the similarities and differences between you and Catana Starks?

TPH: [Chuckles] I’m not really an athlete, though I’m quite capable of playing one on TV or film. [LOL] I’ve been to the driving range, and I do have good hand-eye coordination, but that’s about it. I’m not going to try to play basketball.

KW: Patricia also asks: What does Catana Starks mean to you and how did you prepare for the role?

TPH: She means the world to me, because she proved that you can accomplish anything in life as long as you believe, have faith and work hard. How did I prepare for the role? I spent a lot of time at the driving range and talking to Dr. Starks before filming. Because she wasn’t a recognizable figure, I wasn’t worried about walking or sounding like her, I just wanted to bring her essence to life. And that’s all she was concerned about too.

KW: Has she seen the film? What did she think of it?

TPH: Yes she has, and I think she’s quite happy about it.

KW: Patricia closes by saying: I really enjoyed your performance and your character, Lauren, in Think like a Man. I can’t wait to see Think like a Man Too this summer. Is there anything you can share about the sequel without spoiling it?

TPH: We go to Vegas, and one of the couples is getting married, but I can’t say who it is. It is hilarious! Some people say it’s funnier than the first one. But you be the judge, Patricia.

KW: Environmental activist Grace Sinden says: You’ve had a successful career in movies and television. What aspect of your work has given you the greatest satisfaction?

TPH: What gives me the greatest satisfaction is the number of people I can affect with my gift, with what I do. That’s the most important thing to me, more important than any trophy or award.

KW: Grace has a follow-up. Do you want your son to have a life in show business?

TPH: I want him to find his own passion, whatever that is. I just want him to be happy and successful in whatever he decides to do.

KW: Robin Beckham of Pittsburgh Urban Media says: It was recently reported that Jaden Smith and Jackie Chan are making a sequel to Karate Kid. Will you be rejoining the cast as Jaden’s mother?

TPH: I hope so, if that rumor’s true.

KW: Harriet Pakula-Teweles says: I’m really sorry you got killed off on the TV show “Person of Interest.” You work with ease in movies, music and TV. Which of these media is your favorite and how does it best show your talents?

TPH: I would have to say movies are my favorite. I love doing TV, too, but it’s always rush, rush, rush. With a feature film, those moments and scenes get a chance to breathe, because you don’t have to accomplish as much in one day.

KW: Documentary filmmaker/professor and author Hisani Dubose says: Not many African-American actors have the juice to greenlight a project. She’s wondering whether you are in a position to get a project that you like greenlighted?

TPH: I’m getting there. Hopefully, the success of From the Rough will help, because you first have to prove that you’re bankable at the box office, before you can greenlight anything. So, I hope to have that kind of leverage after this film.

KW: Could you say something controversial that would get this interview tweeted?

TPH: I don’t know. I could say a lot of things.

KW: When I asked Marlon Wayans that, he said, “Yeah, I could, but it might end my career.”

TPH: Life! Just waking up everyday, and having another chance to get it right.

TPH: “I Declare” by Joel Osteen.

TPH: Probably a bird. I like anything with feathers that can fly.

TPH: I think I’d like to be able to control the weather, like Storm [the character from the X-Men].

TPH: Yes, visit Africa. I haven’t done that yet.

TPH: A charity that my best friend since 7th grade started called Art Creates Life. [ http://www.artcreateslife.org/ ] She raises money to take inner-city children to Africa. Isn’t that crazy? I donate and I support that organization, but I’ve never been to Africa myself. I’ve sent a lot of kids there, though.

KW: That’s funny! The Melissa Harris-Perry question: How did your first big heartbreak impact who you are as a person?

TPH: It proved to me that what doesn’t kill you makes you stronger.

TPH: I’m pretty much the same. I’m consistent. There aren’t two me’s. There is only one me. I can only be myself, and that’s who I always am whether I’m at home or on the carpet.

KW: Thanks again for the time, Taraji. I really appreciate it. Good luck with the film.

TPH: Thank you so much, Kam.

To see a trailer for From the Rough, visit: http://www.youtube.com/watch?v=lKYfKidQnOQ