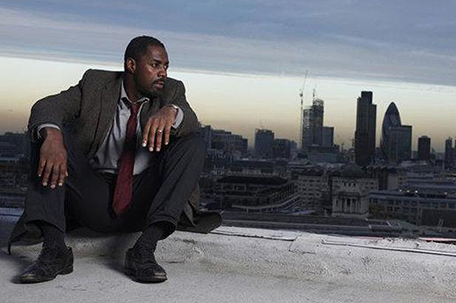 UPDATE 3/29/15: Former Bond actor Roger Moore claims that comments he made in a French magazine about the potential for Idris Elba to play James Bond, were taken out of context by the magazine. Moore: “An interview I gave to Paris Match implies I said something racist about Idris Elba. That is simply untrue… When a journalist asks if ‘Bond should be English’ and you agree, then quotes you saying it about Idris Elba it’s out of context.”

Speaking to Paris Match magazine, veteran actor and former James Bond, Roger Moore, shared that he felt Idris Elba would make an “unrealistic” 007, because he’s not English enough apparently. This comes after many months of rumors that Elba would be heir to the Bond movie throne once Daniel Craig’s stint is up.

Moore’s exact quote was: “Although James may have been played by a Scot, a Welshman and an Irishman, I think he should be ‘English-English.’ Nevertheless it’s an interesting idea… but unrealistic.”

I know what “unrealistic” means, buy what does he mean by “English-English”?

Moore didn’t clarify, even after news of his dissent spread across social media and fans took him to task. His only reply, via Twitter, was that what he said was “lost in translation.”

Is he suggesting that, because Idris is of African descent – specifically born to a Sierra Leonean father and Ghanaian mother – he isn’t “English-English”? Although Elba was born and raised in London. Is it because Idris is black and, according to Moore anyway, that makes him less “English”? Or is this less of a race issue, and more of class divide? Although I don’t believe Moore nor Sean Connery, or any of the other Bonds came from upper class or elite families – except for maybe David Niven, who appeared in only one Bond film. In fact, most of them had rather modest upbringings. Or is there indeed something that’s been lost in translation that only my friends in the UK can help the rest of us understand? As you can see, I’m trying to be open to other interpretations of this that I may not be aware of, instead of immediately jumping to conclusions. But, from where I’m standing, this smells foul Sir Moore!

Is this like when Barack Obama was running for president the first time, and his status as an American citizen was challenged by many claiming that he wasn’t actually “American-American,” in part because his father is Kenyan?

An exclamation mark of sorts was put on rumors of Elba being the heir apparent to Craig earlier this year, when it was revealed, via the infamous Sony email leaks of last fall, that then Sony chief Amy Pascal shared with Elizabeth Cantillon, former executive vice president of production for Sony subsidiary Columbia Pictures (distributor of the James Bond films), that: “Idris should be the next Bond.”

The leak came about three years after Elba’s name was first tossed around as successor to Craig. Since then, it’s been nothing but speculation, as well as the hopes and dreams of many. Elba has said he’d be interested in the part if it was offered to him, but that he isn’t chasing it.

And 007 co-star Naomie Harris did reveal in a 2012 interview with Huffington Post (during a press tour for Skyfall), that Elba told her he’d met with Barbara Broccoli (producer of the Bond movies), adding that “it does seem like there is a possibility in the future that there could very well be a black James Bond. And I would have to vote for Idris because I just finished working with him and he’s a great guy.”

But if it is to happen, it wouldn’t be any time soon, since Craig is signed up for two more James Bond movies (including the upcoming Spectre which will be out this year). Since the franchise, under the Broccoli production era, began in 1962, the company has produced a new James Bond film, on average, about every two years. Although there was a four year gap prior to Skyfall, and now a three-year gap between Skyfall and the upcoming Spectre. So if that every-two-years trend continues, Craig’s last film would probably be released no earlier than 2017, which means that, if the plan then is for a “black Bond” to replace him, Elba’s Bond film would most likely be a 2019 (at the earliest) story – at least four years from now.

And assuming it will be Idris, he’ll be 47 years old by then; a seasoned age to begin your Bond career. Daniel Craig started when he was 38; Sean Connery was just 32 years old when he made his first Bond film; Roger Moore was 46; Pierce Brosnan was 42. Timothy Dalton was in his very early 40s. David Niven was 56 when he played Bond for his first and only film. So he didn’t have to carry the franchise for years like the others have. The same goes for George Lazenby, who was just 30 in his Bond film.

So Idris taking over the role at 47/48 years old, would put him just above Roger Moore.

But age is just a number right? If he’s up for the role when the time comes, then why not?

And if he’s not, but there’s still a desire to have the character played by a black actor, it’s a role that could very well go to some younger black British actor. Although no one immediately comes to me.

But all of this is pure speculation anyway. And I doubt that what Roger Moore says will have any impact on who the next Bond is.