“Rock and a Hard Place”, a powerful look inside a youth prison boot camp, debuts March 27, exclusively on HBO 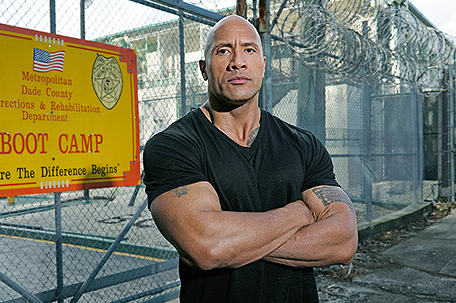 ABOVE PHOTO:  Co-Executive Producer Dwayne “The Rock” Johnson hosts ‘Rock and a Hard Place’ a new documentary about a prison rehabilitation boot camp for troubled youths on HBO.

Incarcerated young people enter the famed Miami-Dade County Corrections & Rehabilitation Boot Camp Program in search of a second chance: the opportunity to trade an extensive prison sentence for a fresh start. In this harsh, 16-week camp, drill instructors push inmates to their limit, but those who complete it can become constructive members of society who are substantially less likely to return to prison. The program reports a recidivism rate under 15 percent, while the national rate of prison recidivism is approximately 70 percent.

Inspired by Dwayne Johnson’s own experiences with the law as a youth, the documentary  “Rock and a Hard Place,”debuts on Monday, March 27, at 10 p.m. exclusively on HBO.

The documentary will also be available on HBO ON DEMAND, HBO NOW, HBO GO and affiliate portals.

“Rock and a Hard Place,” is a passion project for Dwayne Johnson, who calls it one of the most important films he’s been associated with. “By the time I was 16, I had been arrested multiple times for a variety of things, and can relate to what these kids are going through,” he says.

The film opens with Johnson’s visit to the boot camp, where he observes the induction of a group of 38 young offenders, convicted of crimes ranging from assault to armed robbery, who are on the brink of lengthy prison terms. Once the chaos has subsided, he tells the young men why he wants the world to see this program and emphasizes why he believes this may be their last chance.

“Rock and a Hard Place” follows the inmates through each phase of the camp, beginning with the brutal first weeks, which are marked by constant verbal confrontation, physical training and strict military-style discipline. Several cadets can’t or won’t comply with the rules, and the ranks are thinned to 35 after a month. Those who remain resolve to follow their instructor’s extreme demands, although tears and moments of resistance sometimes surface.

As the weeks go by, cadets attend anger-management classes, learn vocational skills and are surprised by “protocol tests” that measure their progress and patience. In what guards call “a test of discipline,” some of the more promising men are selected to leave the prison as part of a mobile work crew. Two of them decide to escape during one such session, but are soon recaptured after a manhunt that makes the evening news, and now face even longer prison sentences. The incident rattles camp guards and management, who warn the other prisoners that escape attempts will only undermine the legitimacy of the entire program.

Cadets finally arrive at graduation day, where family members beam as they march past in precise formations before being released to their loved ones. Johnson gives emotional remarks as he congratulates the young men at a post-graduation courtroom reception.

Jon Alpert and Matthew O’Neill note, “As our nation wrestles with a prison system that has become the largest in the world,  “Rock and a Hard Place” highlights an alternative incarceration program that provides a pathway to hope and positive change.”

“Rock and a Hard Place” marks the second collaboration between HBO and Seven Bucks Productions, following the hit series “Ballers,” which returns for its third season later this year. The supervising producer for HBO is Jacqueline Glover and the executive producer, Sheila Nevins.