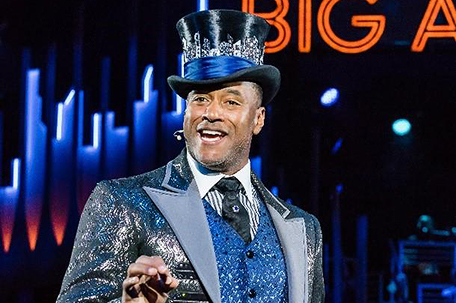 “Live life to the fullest” is a mantra familiar to most.

While some may find that phrase cliché, others take it to heart and proceed accordingly. Those who chose to live a life fueled by passion and led by adventure have a unique opportunity to experience the vastness of all that life has to offer. Ty McFarlan is an example of someone who has done just that, and continues to do so.

McFarlan graduated from the University of South Carolina with a degree in criminal justice.  He then went on to proudly serve in the United States Army for 13 years before realizing that his zeal to entertain had to take center stage, resigning his commission and getting an honorable discharge from the military to pursue his dream of becoming a professional singer.

While he got a deal with a major record label, the fickleness of the music industry led him to musical theater and acting. McFarlan got roles in several television shows, and national commercials, as well as some theatrical roles.

By a twist of fate, McFarlan  joined the Ringling Bros. and Barnum and Bailey Circus, becoming its 34th ringmaster.

He is now the current ringmaster of the Big Apple Circus, which will be held at Philadelphia Mills, 1455 Franklin Mills Circle, in Northeast Philadelphia.

While many have attended a circus, some may not be fully aware of the responsibilities each moving part  plays in creating a dynamic show. As the current ringmaster for the Big Apple Circus, McFarlan offered an in-depth look.

“A ringmaster traditionally owns the entire show,” he said.“A ringmaster is responsible for logistics in the show, and not only for hosting the show but also payroll, upkeep of the animals, load out and load in…he was literally responsible for everything. Nowadays a ringmaster’s job is primarily the host of the show.”

“By virtue of my stature, my supposedly commanding presence, my costume and everything that’s packaged up to make a ringmaster… my job is to reign in the focus of thousands of people watching and to hold that focus for the purposes of introducing the next act or the next mind blowing feat that the audience is going to see,” he continued. “So primarily a ringmaster’s job is to grab attention, hold attention and redirect attention. I do that throughout the entire show.”

After performing the role of ringmaster with Ringling Bros. and Barnum and Bailey for four years and with several other circus shows, McFarlan is no stranger to what makes a show resonate with its audience. He shared the aspects of the Big Apple Circus that make it stand out from the rest.

“One thing that I really love about the Big Apple Circus is the ‘at-home in your living room’ kind of feel that it provides,” he said. “There is one ring, and all of the seats are nearly 360 degrees around the ring. Every seat in the house is a great seat! It’s so up-close and personal that people have an opportunity to really experience something and come away with the feeling of having been involved. You are able to give full attention to what’s going on. It brings out a different set of emotions because where some things can be too overbearing or too over stimulating… this is stimulating enough that you’re able to get it all in without missing a beat.”

So what can audiences expect to see during their Big Apple Circus experience? McFarlan offered a description of some of his favorite aspects of the show.

“It is such a good show from start to finish that I can’t say that I have a favorite act,” he said. “I get so excited about the opening and what we’re going to bring to the ring for everyone to experience. We have in the show Nik Wallenda, a 10-time Guinness World Record holder.

He is the first person to walk a high wire over the Grand Canyon and the only person to walk a high wire over Niagara Falls. In the show there will be a seven-person pyramid, which is an incredible feat. Ammed Tuniziani is one of nine flyers in the world to actually successfully catch the quadruple somersault. He has made that catch 101 times since our tour began in September.

Our contortionist Elayne Kramer is one of [former Marvel Comics head] Stan Lee’s ‘Superhumans.”She will shoot a bow and arrow with her toes in an unbelievably arched position,” McFarlan continued. “Her feet and torso extend over the top of her head. She will actually pop a balloon about 20 to 30 feet away from her. I am fortunate to say that I work among some of the most incredible people on the planet!”

In addition to seeing a show that is truly a spectacle, the Big Apple Circus also offers their audiences opportunities for a meet and greet, autograph signings, and they are encouraged to take video and pictures to share using the hashtag #bigapplecircus.