Rihanna talks motherhood, Super Bowl: ‘It was now or never’ 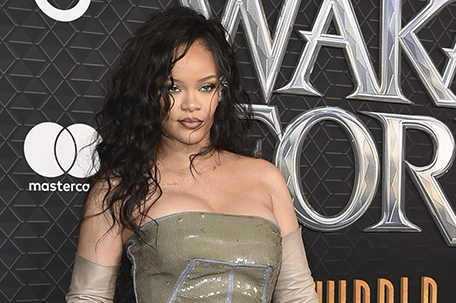 ABOVE PHOTO: Rihanna arrives at the world premiere of “Black Panther: Wakanda Forever” on Wednesday, Oct. 26, 2022, at the Dolby Theatre in Los Angeles. (Photo by Richard Shotwell/Invision/AP)

SIMI VALLEY, Calif. — Rihanna knew that if she was going to return to the stage less than a year after giving birth to her first child, the performance would have to top anything she’d done before.

That something special turned out to be the upcoming 2023 Super Bowl halftime show. “It was now or never for me,” she said.

The singer had previously declined to perform in the 2019 halftime show out of solidarity with Colin Kaepernick. But in a recent interview ahead of her “Savage X Fenty Show Vol. 4,” Rihanna said that the timing and circumstances this time around were right for her. “It was a challenge that I welcomed. It was a stage bigger than anything I’ve ever done,” she said.

After the NFL announced in late September that Rihanna would headline the February show, hopeful rumors spread of a long-awaited new album, which she has been teasing in recent years. Her last album, “ANTI,” was released in 2016.

Although the pop star recently dropped her first new song in six years, the lead single for “Black Panther: Wakanda Forever,” she was quick to shut down speculation that her Super Bowl performance meant an album was imminent. “That’s not true. Super Bowl is one thing. New music is another thing. Do you hear that, fans?” she said, laughing.

“The second that I announced this, I said, ‘Oh, my God, they’re going to think my album is coming. I need to get to work,’” she recalled.

Despite her quick return to the public eye after giving birth, Rihanna, and rapper A$AP Rocky have kept the details about their baby private. The two have yet to share his name or any photos of him.

“We just didn’t get around to it yet, really. We’ve just been living. But I guess there’s a certain freedom that comes with kind of just like getting it out there,” she said.

In addition to adjusting to life as a new mom, Rihanna said she has been busy outdoing last year’s “Savage X Fenty Show Vol. 3,” which earned an Emmy and included a long list of high-profile stars.

“It’s always challenging to beat the one before,” she said. “Next year is going to actually be the main challenge because this year was such a huge scale of a show and I don’t know how we’re going to beat it, but we’re going to have to try.”

This year’s show includes performances by Anitta, Maxwell, and others, as well as a long list of appearances, including Taraji P. Henson, Cara Delevingne and Sheryl Lee Ralph. AP’s interview with Rihanna came before word leaked that Johnny Depp was slated to participate. Some people unhappy with Depp’s legal battle with ex-wife Amber Heard called for a boycott of Rihanna’s line if Depp was part of the show.

The “Savage X Fenty Show Vol. 4” will be available to stream Wednesday on Amazon Prime Video.