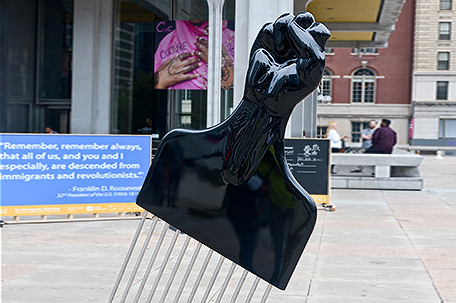 ABOVE PHOTO: “All Power To All People” by Hank Willis Thomas (Photo: Bill Z. Foster)

The Rizzo Statue has a new friend.

When I was a kid in the 70s, my brother and his friends wore the kind of Afros you’d see on “Soul Train” on Saturday mornings.

They were huge, perfectly round masterpieces that were kept that way through Afro pics with the “Black Power” fist on them, with metal prongs that helped puff out their hair.

Philadelphians of a certain age are remembering those days, thanks to a new statue on Thomas Paine Plaza in front of the Municipal Services Building.

The piece, “All Power To All People” is a statue of one of those Afro pics with the Black Power fist. In a placard attached to a gate in front of the statue, artist Hank Willis Thomas said he created the 800 lb., 8-foot-tall statue because this particular Afro pic was never really just an Afro pic.

“[The pic] exists today as many things to different people,” he said. “It is worn as adornment, a political emblem, and signature of collective identity.”

Where the statue is placed, Thomas continued, is based on his desire to start conversations regarding the concept of community, perseverance, comradeship and resistance to oppression.

It’s that last one that seems to have made the positioning of this statue more than a little ironic.

I mean, hey, do you really think that former Mayor Frank Rizzo would want to go anywhere near an Afro pic?

That’s right, this rather large Afro pic, complete with its Black Power fist, has been placed almost directly behind the Rizzo statue.

There is a pretty vocal contingent that would love to see “Power To All People” take the spot that the Rizzo statue, which was commissioned shortly after his death in 1991 currently occupies.

City Councilwoman Helen Gym (D- At Large) and POWER (Philadelphians Organized to Witness, Empower and Rebuild) called for the Rizzo statue to come down in the wake of the White Nationalist rally in Charlottesville, and while activists have volunteered to tear it down, Mayor Jim Kenney has come up with a better—and less illegal—idea.

The City’s Commission on Arts and the Creative Economy will, with the help of Philadelphians, make a final decision on whether the Rizzo statue stays at the MSB or is moved elsewhere.

On Friday, the last day to send letters to the commission to let them know how you feel, anti-Rizzo activists will gather from 11 a.m to 3 p.m. at “Power” to give citizens the chance to sign letters requesting the statue’s removal.

You can also go to https://beta.phila.gov/departments/mayor/call-for-ideas-rizzo-statue/ to make your feelings known.

In a way, “Power” reminds me of why folks want the Rizzo statue removed from public property. To say that the former mayor (and police commissioner) was less than kind to the folks in the Black Power Movement would be an understatement.

People walking around with the kind of Afro pic depicted in the statue were frequent targets during Rizzo’s tenure. Public strip searches and broken nightsticks were so common in Philadelphia that the federal Department of Justice sued the Philadelphia Police Department in 1979.

So, while the message of “Power” might be too quiet for some and too loud for others, it might be just enough to get people to think about what art Philadelphians want in their public spaces and whom they want to memorialize.

In any case, I got some great pictures of a pic that I’ve always wanted, but can’t seem to find anywhere…