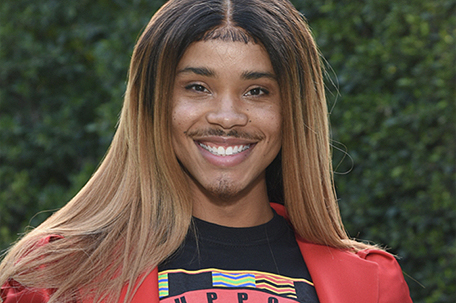 The popularity of the show led to the spinoff, “All American: Homecoming,” which premiered on The CW in February.

“All American: Homecoming” follows the lives of two student athletes — Simone (Geffri Maya), a budding young tennis star and Damon (Peyton Alex Smith), an elite baseball player. They both struggle to find their place at Bringston University, an HBCU where “Black excellence is a way of life.”

Rhoyle Ivy King stars as Nathaniel on the show and makes history as The CW’s first non-binary BIPOC character. King spoke to The SUN about his joy in being part of the show, leading with love and the importance of representation.

King began singing, dancing, and participating in choir during the transition between middle and high school. Someone convinced him to try out for theater — the rest was history.

“I tried out for a Shakespeare camp and fell in love with it, which gave me the confidence my freshman year to try out for the school play (“Stand and Deliver”),” King said. “I was blown away that I got in and was the only freshman. From that experience, I truly found one of my first safe spaces.”

After high school, King went on to study in New York. He shared one of the most valuable lessons he was taught regarding the various mediums of performance.

“One of the most important aspects that I learned from a teacher was that film and television is an image-based medium,” King said. “Essentially, you should be able to turn off the sound and receive the story, whereas theater is a language-based medium. The audience in the back row can’t see your face, but they can hear you and get the emotion there. It truly taught me where to focus the straw that I was pushing the energy through. I was so grateful to have instructors [who]were able to help me navigate that.”

King received additional guidance from his former acting coach Danielle Pinnock of CBS’ “Ghosts,” who shared the next steps he should take after he moved to LA. That guidance, in part, led King to the role of Nathaniel in “All American: Homecoming.”

“I still remember the day that the audition notice came in — I was shook!” he said. “I had been a fan of “All American” since its first season. Once it hit Netflix, I binged it and was obsessed. It had the most beautiful cast I’d ever seen on television. Getting the audition, I took a few days to prepare, and I really got myself grounded in what was happening in the scene. The character description said she is fly, and I said ‘period,’ let’s incorporate some of the fashion and beauty into who she is as a person.”

In addition to adding his own unique flair to the character, King discussed what this character means for the LGBTQ+ community, as he makes history as the first non-binary BIPOC character on The CW.

“I told NK (Nkechi Okoro Carroll, the series creator) ‘Do you know that this is healing the young kid in me?’ This is full circle, coming back around. I remember sitting in school looking up going, ‘What am I going to do? Who do I have to look up to?’ So, to finally get to be that for so many young queer Black people is an honor. To know that every day, I get to play a character that I needed to see — that to me is the dream.”

“I had conversations with GLADD to understand the differences, but also the similarities between me and this character and to understand the intersectionality between the two of us as far as our gender non-conforming way of expression,” King continued. “They were so graceful to let me know how important it is that someone play this role that understands those experiences.”

The character Nathaniel in many ways reflects King’s desire to be a bridge and to always lead with love.

“My thing about her (Nathaniel), was that she is a ‘lead with love’ human being,” King said. “Her power for me is the strength of her love and the way that she’s there for her friends. She is a pre-law major and that alone really comes down to her love for people. It’s an emotional connection that she has that she’s willing to go above and beyond for the people that need her.”

In addition to “All American: Homecoming” showcasing a wide array of diversity and talent, it also serves as an example of the valuable experiences that life at an HBCU has to offer.

“The script talks about how being at an HBCU allows you to pull from your history and other examples of excellence to fuel and inspire you, to let you know that you’re not on this journey alone,” King said. “One of the most beautiful things about an HBCU is that you’re surrounded by people that understand your experience and are rooting for you.”

The chemistry of the cast of “All American: Homecoming” is an added bonus. The camaraderie felt when watching the cast on camera is a reflection of the bond they share off-screen.

“What you are getting on camera is us as soon as the cameras are cut,” King said. “We have a cast social media account called Bringston University — the stuff we put on there shows people how we really are. We have gotten so close. I truly owe it to our showrunner NK, because she established from the beginning, [that] if you’re going to work here,  I am a ‘lead with love’ human being.”

“It was an absolutely overwhelmingly wonderful experience getting to know all of these beautiful people and continuing to work with them,” King said. “I’m so grateful to every person that was a part of bringing me on this.”

Be sure to follow and support Rhoyle Ivy King on social media @RhoyleIvyKing. Tune into “All American: Homecoming” on The CW every Monday at 9 p.m.ET.