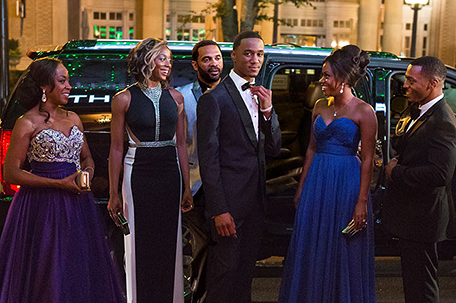 It’s easy to look at the current television landscape and find plenty to get excited about, especially in terms of diversity.

Black actors are taking lead roles on just about every network, and shows with predominantly black casts are breaking viewing records left and right. However, it’s also true that diversity is not achieved by the mere presence of more faces of color on popular shows—the types of characters we see and the purpose they serve on these shows is paramount to telling complex and interesting stories that better represent a truly diverse world.

The presentation of women of color is always one great way to measure the actual “diversity” of a series, which is what makes Starz’ “Survivor’s Remorse” (from “Shameless” writer Mike O’Malley) such an interesting specimen. The Season Two trailer was recently released, and if you’ve recovered from the awful blow of that “F*** Nelson Mandela!” line, now’s a good time to look back on some highlights from Season One, where the women (pretty much) ran the show.

It’s important to first stress that the characters played by the male actors are plenty interesting. Jessie Usher as Cam Calloway has to balance new money and new fame with old habits (and, heading into Season Two, possibly an old flame). RonReaco Lee as Reggie Vaughn is his cousin and manager, helping him to make smarter decisions, so that he won’t end up on a future ESPN “Broke” documentary. And Mike Epps is basically playing Mike Epps—Uncle Julius taking advantage of all the groupies Calloway passes up (and, yes, offering up some sound advice throughout the series as well).  Still, and at the risk of being accused of reverse-sexism, I find that their characters often function as eye candy, especially when the women of the series enter the scenes.

Tichina Arnold has always known how to dominate a room on set, and not much has changed since her days on “Martin” and “Everybody Hates Chris”. As Cam’s mother, Cassie, she continues to deliver that trademark powerhouse performance. Before Cookie Lyon shocked the world with her broomstick butt whooping on “Empire”, Cassie shocked the sports world when she went on national television in episode two and proudly attributed her son’s success to all of the beatings she’d given him over the years (describing in detail what it sounds like when you whoop a child with a Hot Wheels track). On another show, the writers might not have known what to do with Arnold’s unique comedic prowess, but the “Survivor’s Remorse” team work to put her character in unique situations that benefit each episode’s plot and highlight her talent. Watching the [totally performative] tears stream down her eyes as she retracts her statements on the power of whoopings, and begs her son’s fans not to beat their kids is as thrilling as watching her use the history of slavery in an attempt to get a good deal on a prime piece of Atlanta real estate in episode five. In addition to her perfect comedic timing, we also get to occasionally see the softer side of Cassie, as well as the fierce family woman who manages to ride for the cause, without sacrificing herself.

Delivering a similarly fantastic comedic performance is Erica Ash (who played Bridgette Hart on “Real Husbands of Hollywood”) as Cam’s sister M-Chuck. Early on in season one she has a nude scene, and even though it’s under very unusual and exceptionally bizarre (perhaps even illegal) circumstances, it had me a bit concerned that she’d be reduced to a fun supporting character, who’d be appearing topless from time to time. But alongside Arnold, Ash is really given her space to shine and bring on the laughs. Her one-liners are incredible (you’ll find out what a FOPA is in episode two, and you’ll never be the same), and if you’ve ever struggled with your relationship to the Black Church, you’ll appreciate her Bible-throwing fit in episode four.

“Survivor’s Remorse” also takes the road less traveled with Ash’s character, where her sexuality is accepted as easily and readily by her family as everyone else’s. It’s a nice change-up from the popularized (and sometimes misrepresenting) notion that most—if not all—black Americans struggle with coming out to their families because of a hyper-homophobic atmosphere. In reality, many black gays and lesbians have an M-Chuck-like experience, where they are able to be out and are supported by the people in their lives.

One of the best storylines to come out of Season One was also one of the biggest surprises, as it involved actual acknowledgement of class and status issues within black families. On other shows where we see black characters who are well-off or wealthy, it is often presented as mere fact, without much complication. But at the core of “Survivor’s Remorse” is Cam, a character who often feels wrecked with guilt over his success—and makes lots of bad decisions as a result. And even with Cam in the lead, it’s Teyonah Parris (of “Mad Men,” “Dear White People”) as Reggie’s wife Missy Vaughn who helps create the most interesting narrative on this issue. As Cassie Calloway puts it, “Missy’s made from a nice mold.” She comes from a well-to-do family, and although her prissy background is sometimes the butt of the Calloway jokes, her access to another world proves to be extremely useful in their brand-building. She knows all about the historically black golf clubs Reggie needs to join and she also functions as his business partner. Somewhat reminiscent of Kerri Bishé’s Donna Clark in “Halt & Catch Fire”, she’s as educated and capable (more so, in some ways) as her husband, and when he finds himself signing the deal for Cam’s first major endorsement, it’s Missy who has to sign off on the final term sheet. In the season finale, she opens up about a man from her past (a fellow she fell in love with while studying abroad in Spain—we’ve all been there). Her conversation with her husband, a Dorchester native, draws attention to the vast differences between them. They’re in the midst of a conflict that gets complicated by Missy’s background and even though it’s not the dominant issue, it’s one strong example of this show’s ability to centralize the women and focus on their uniqueness, further highlighting them among the prototypical TV storylines for women.

It’s too soon to tell how much impact “Survivor’s Remorse” will have on TV, to predict whether or not it will go on to be another big hit for the Starz network. But if Season Two sees a continuation of this trend—where the female characters are dynamic and given plenty of opportunities to stand apart from the male stars—then we have every reason to be excited about the coming 10 episodes.

Shannon M. Houston is Assistant TV Editor & a film critic at Paste, and a writer for Pink is the New Blog and Heart&Soul. This New York-based freelancer probably has more babies than you, but that’s okay; you can still be friends. She welcomes almost all follows on “Twitter”:https://twitter.com/shannonmhouston.

What new shows with Black actors might be coming To TV this Fall? We have a full list for you! Part two