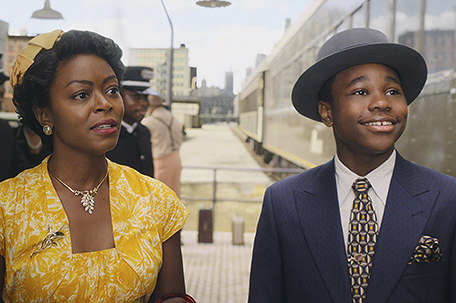 ABOVE PHOTO: This image released by Orion Pictures shows Danielle Deadwyler, left, and Jalyn Hall in a scene from “Till.” (Orion Pictures via AP)

Almost by default, filmmakers typically take a wide lens to historical moments like the 1955 lynching of 14-year-old Emmett Till. In reaching for a defining chapter of America, it’s natural for a movie to aim for a sweeping portrait of a shifting society.

But in “Till,” a wrenching, rigorous drama about Till’s brutal murder, director Chinonye Chukwu keeps the story gripped to Emmett’s mother, Mamie Till-Mobley (Danielle Deadwyler), reorienting a public crime as a private trauma, and Mamie’s subsequent metamorphosis into a civil rights activist as a profound act of grief-fueled resistance.

“Till,” which opens in select theaters Friday, isn’t your average historical drama and it’s all the more powerful for it. In the opening scene, Mamie is driving with Emmett (Jalyn Hall) in Chicago while the Moonglows’ “Sincerely” plays on the radio. Emmett sings along breezily and happy while the camera pulls in on Mamie, whose face turns from joy to worry. She knows that for Emmett, as a young Black man, to be carefree is dangerous. It’s also an early signal of how perspective will play a potent role in “Till,” and how pointed and penetrating Chukwu’s camera can be.

Chukwu, a Nigerian-American filmmaker, broke through with 2019’s “Clemency,” a piercing drama about a prison warden weighing a death row case that gave Alfre Woodard one of her finest roles. “Till,” likewise, is a showcase for its lead actor. Deadwyler gives a career-making performance as Mamie, perfectly poised between grief and strength. The film, which is dedicated to Mamie, ultimately belongs to her.

“Be small down there,” Mamie tells Emmett. This is just before he leaves on a train to visit family in Mississippi, a trip that palpably concerns his mother. Once he’s there, her unease is all-consuming; she won’t breathe easy until Emmett is “back on Chicago soil.” When the fateful phone call comes, it’s shocking but also devastating for its predictability. “Till,” an aching wail of a movie, is a story in many ways about the inevitable tragedy of American racism.

The film, penned by Michael Reilly, Keith Beauchamp and Chukwu, spends some time with Emmett in Mississippi before he’s kidnapped, tortured and murdered. Exactly what transpired between Emmett and Carolyn Bryant (Haley Bennett) at her family’s grocery store has had differing, and surely falsely exaggerated, accounts. Chukwu plays the interaction simply and straightforwardly. When days later, ominous knocking is heard outside the home of Emmett’s uncle, the abduction is artfully and terrifyingly staged.

What’s seen and what isn’t has always been part of the Emmett Till story, which first found national attention when Mamie allowed a magazine photographer to take pictures of her son’s mutilated body. Chukwu elects not to visually dramatize Till’s killing but, like those magazine photos, doesn’t shy away from the painful evidence of it.

When the NAACP and Medgar Evers (Tosin Cole) enter Mamie’s orbit, she’s initially resistant. “My son is not a case,” she says. Gradually she resolves to make “America bear witness.” For her, it’s a gut-wrenching decision because it means not keeping her grief for her son — all that she has left of him — to herself. “You’re not just my boy anymore,” she whispers to him at the open-casket funeral.

Mamie travels to Mississippi for the trial before an all-white jury in a hopeless effort to bring Emmett’s killers to justice. When she takes the stand, Chukwu deliberately avoids letting the camera fall on the many places it might usually settle in a courtroom drama — on the attorneys, on the disinterested judge, on the murderers. The movie’s precision in focus doesn’t allow such distractions. “Till” isn’t about them. It’s about the sacrifice and courage it takes Mamie, and so many more, to confront racial injustice. One of the film’s postscripts — the date the Emmett Till Antilynching Act was signed: March 29, 2022 — is a reminder that “Till” is in many ways no period piece. And, as one NAACP attorney says: “There’s no testimony like a mother’s.”

“Till,” an MGM release, is rated PG-13 by the Motion Picture Association of America for thematic content involving racism, strong disturbing images and racial slurs. Running time: 130 minutes. Three and a half stars out of four.