Review: The tech is advanced, but ‘Gemini Man’ is lifeless 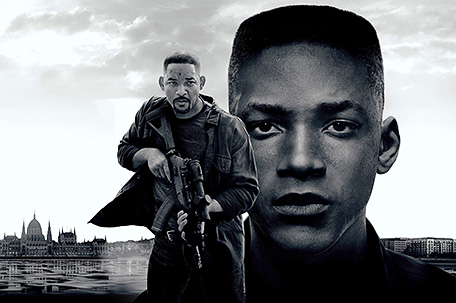 Will Smith is usually an asset for a movie. He’s the kind of true movie star whose charisma can elevate even the most mediocre material. You’d think then that it would be a good thing to have not just one but two Will Smiths in a movie if you can. That was at least part of the idea behind ”Gemini Man.” The action film from Ang Lee also uses state of the art de-aging technology to create a basically believable 20-something version of Smith and has billed itself as a “true event film” that “redefines action cinema.”

Those are some lofty claims, but unfortunately its biggest accomplishment seems to be in sapping all the charm out of Smith (twice!). For all the hype about the modern technology, the story is curiously stale and at times feels like a mashup of other, better movies. It makes more sense when you learn that “Gemini Man” was written over 20 years ago and has gone through enough possible directors and stars to fill out a baseball team. Certainly it’s been updated since whatever version was making the rounds in 1997 — “Game of Thrones” showrunner David Benioff shares a story and screenplay credit with Darren Lemke and Billy Ray — but it still has a dated core, and not in a good, self-consciously retro way.

Smith, at his current age, plays Henry Brogan, a talented assassin employed by the U.S government who just wants to retire. The film begins with his last job: He has to assassinate someone on a full speed bullet train while perched on a hill outside. Brogan is a one-in-a-million sniper, you see, and a bunch of other guys failed where he succeeded.

But of course hanging up his hat afterward for a quiet life of fishing isn’t as simple as he hoped. He soon finds out that he’s being monitored, and then hunted by his former employers including a bureaucrat played by Linda Emond and a private contractor named Clay Varris (Clive Owen), who is one of the most one-dimensional “bad guys” we’ve had the privilege of spending time with in a while.

Henry has no choice but to go on the run, bringing the young agent who was assigned to surveil him, Danny (Mary Elizabeth Winstead), along because, well, there has to be a potential love interest in a movie like this, so why not?

This won’t come as a surprise to anyone who has seen any sort of “Gemini Man” marketing, although the movie seems to think it is a surprise, but they soon discover that the person Henry’s being hunted by is a much younger version of himself. “Junior” (a de-aged Smith) is part of a shadowy program run by Varris called Gemini. The construct of “he knows every move I’m going to make” is an interesting one, but this film barely does anything with it. It’s too busy inexplicably continent hopping and giving Winstead, Smith and Benedict Wong one-liners even they can’t sell.

Lee once again is using the high frame rate he deployed in “Billy Lynn’s Long Halftime Walk” (which I liked more than most) but it’s even more distracting this time around. The hyper reality makes everything look somehow cheaper and less cinematic and it detracts from some of the genuinely well-choreographed action set pieces. And while “Junior” does look pretty good for a computer-generated approximation of a 23-year-old Smith, it’s hard not to wish that all the time and money spent on this gimmick might have been put toward making sure the script and story were at least engaging and entertaining. As it stands, “Gemini Man” is a lot of show, but there’s no life behind the eyes.

“Gemini Man,” a Paramount Pictures release, is rated PG-13 by the Motion Picture Association of America for “violence and action throughout, and brief strong language.” Running time: 117 minutes. One star out of four.

Seven Black celebs who are working to increase diversity in tech