Review: The Chicago Seven trial gets the Aaron Sorkin touch 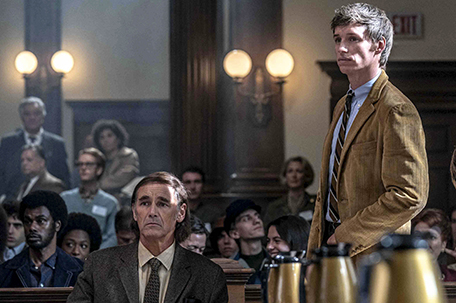 ABOVE PHOTO: This image released by Netflix shows Mark Rylance, left, and Eddie Redmayne in a scene from “The Trial of the Chicago 7.”  (Niko Tavernise/Netflix via AP)

If anyone was born to make a film about the infamous federal trial surrounding the protests outside the 1968 Democratic National Convention, it’s Aaron Sorkin.

The grandstanding of the celebrity revolutionaries Abbie Hoffman and Tom Hayden, the clash of disparate personalities and protest styles, the earnestness of the anti-war cause and the general chaos of the trial itself are all perfectly suited to his brand of storytelling. That he actually got to do it and release it in a year when police and protesters and riots are once again in the news, is almost too on the nose for even a Sorkin joint.

But sometimes things just fall into place perfectly and “The Trial of the Chicago 7,” which Sorkin wrote and directed, is like a little gift in this very complicated year — relevant, smart and very entertaining. And seeing it only requires a Netflix subscription.

But instead of taking us with them to the protests, the film skips ahead to 1969 when Richard Nixon’s Attorney General, John N. Mitchell (John Doman) decides he wants to charge the anti-war all-stars, or “the schoolboys” as he calls them, with conspiracy to cross state lines to incite violence. It’s some masterful exposition (both funny and informative) that sets up a trial that not even the lead prosecutor Richard Schultz (Joseph Gordon-Levitt) believes is winnable or right. Schultz will later try to convince the jury that the eight people on trial are just the “radical left in different costumes.”

Sorkin does a fine job of bringing to life the circus of the trial, with Judge Julius Hoffman (Frank Langella) dolling out contempt of court charges and defendants talking back and cracking jokes (mainly Hoffman and Rubin).

Mark Rylance as the defense attorney William Kunstler has the perfect combination of affability and gravitas to bring balance to a trial that was on one hand ridiculous and on another gravely serious. Seale was there without representation and the judge couldn’t have been less interested in that fact.

The script assumes at least a little bit of knowledge about the players but also tells you everything you need to know to stay engaged. And it’s a joy watching actors stretch with different types of roles (and accents). Strong has fun going full stoner and Redmayne is effortless as the more buttoned-up American. Baron-Cohen perhaps is the most exciting as Hoffman, the activist/showman who even his fellow activists seemed to underestimate.

But the whole production is stacked with brilliant actors in both big and small roles. Kelvin Harrison Jr. appears too briefly as the Illinois Black Panther head Fred Hampton, as does the always wonderful Caitlin FitzGerald as an undercover cop, to name a few.

As in any Sorkin joint there are at least three lines of dialogue that might make your eyes roll into the back of your head and your body produce an involuntary groan so extended that you will likely have to rewind. But it just goes to show how good the rest of it is that a few clunkers could stick out that much.

“The Trial of the Chicago 7,” a Netflix release, is rated R by the Motion Picture Association of America for “drug use, bloody images, language throughout and some violence.” Running time: 129 minutes. Three and a half stars out of four.