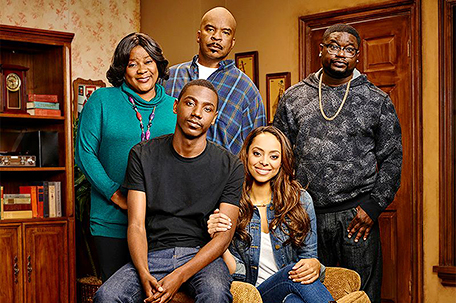 ABOVE PHOTO:  The cast of  “The Carmichael Show.”

“The Carmichael Show,” which hails from Jerrod Carmichael and Nick Stoller (“Neighbors”), is an irreverent sitcom inspired by Jerrod’s real-life relationships with his say-anything, contrarian father (played by David Alan Grier), his therapist-in training girlfriend (Amber Stevens), his ever-hustling brother (Lil Rel), and his mother (Loretta Devine), who is always, always, always right with Jesus.

Did you tune in?

Apparently, many of you did, because, as NBC reports, “The Carmichael Show” drew 4.8 million viewers overall from 9-9:30 p.m. ET, making it the most-watched summer comedy series debut on any of the Big 4 networks (ABC, CBS, FOX, NBC) since 2007, when “Creature Comforts” drew 6.1 million viewers for CBS – a span covering 12 summer-comedy launches.

This follows the August 5th premiere of “Mr. Robinson” which was the #2 highest-rated summer comedy debut on the Big 4 since 2009, a span covering 11 summer-comedy launches.

The second episode of “The Carmichael Show” also performed well, holding onto most of the viewers who watched the first episode, drawing 4.1 million viewers overall from 9:30-10 PM ET.

I partially live-tweeted both premiere episodes, and, based on the feedback I received from those who participated, your reactions were somewhat mixed. No extremes – nobody absolutely hated it; and no one absolutely loved it! If anything, most hoped it would get better as the season progresses; although I should note that it’s only a six episode first season, so there isn’t exactly a lot of time for it to hook its teeth into you, if that’s what you’re waiting for.

But in short, traditional on-set sitcoms – whether in front of a live studio audience, or accompanied by a laugh track – just don’t appeal to me anymore the way they used to 20+ years ago. They look and feel anachronistic – at least to me. So I unfortunately can’t say that this is a show that I’ll continue to watch. But I’m sure many of you will. Different strokes for different folks, as the saying goes.

If you did tune in, thoughts?